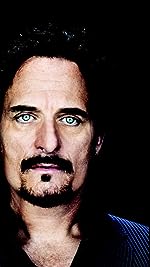 Kim's film career began in 1991 with The Last Boy Scout. Two Warner Brothers' hits followed: Innocent Blood and The Client. Since that time he has starred in over forty films, including Academy Award winners Black Hawk Down directed by Ridley Scott, and Pearl Harbor directed by Michael Bay. Other films include Waterworld and Open Range with Kevin Costner, Grilled with Ray Romano, Silent Hill opposite Sean Bean, Hostage with Bruce Willis, Assault on Precinct 13, Unforgettable, Skinwalkers, and Hero Wanted.Kim returned to Entourage for it's final season as Carl Ertz, the sleazy movie Producer. His performance garnered so much attention in previous seasons that Ertz's return was a direct request. He appeared in a recurring role on CSI Miami. Other prominent guest starring television roles include CSI, CSI NY, Cold Case, and Prison Break. He has had roles in more than 20 MOW's including the NBC miniseries Hercules, and Disney's Scream Team. These dramatic turns on television have earned him Gemini nominations for Best Actor in a Featured Supporting Role for HBO's Dead Silence and Best Performance in a Guest Role Dramatic Series for The Outer Limits.In 2008 Kim starred in and executive produced the film The Poet. Before its wide release it won best picture and best director (Damian Lee) at the New York Staten Island Film festival.At the AOF International Film Festival in Pasadena, Kim received the Half Life Achievement Award for acting in 2009. Kim also won best actor for playing Steve Sorrano in King of Sorrow.Kim starred on Broadway as Stanley Kowalski in A Streetcar Named Desire, as the title role in Macbeth at the legendary Stratford Theatre, and has appeared in over fifty plays in North America.In the fall of 2010 Kim starred in the blockbuster 3D movie Resident Evil Afterlife, with Mila Jovovich.In 2011, Kim starred in Sacrifice, with Cuba Gooding Jr., A Little Help, with Jenna Fisher, Sinners and Saints and Robosapien.In 2012, Kim starred in the sports comedy Goon along side Seann William Scott, Liev Schreiber and Jay Baruchel, for which Kim is nominated for Best Performance By An Actor In A Supporting Role at the 2013 Canadian Screen Awards. Goon was much lauded by international audiences and critics alike.The FX hit series Sons of Anarchy is going into its 6th season. Kim Coates is Tig Trager, the motorcycle club's sergeant at arms. Tig fears nothing, much like Kim throughout his career.Kim has 3 feature films opening in 2013; Rufus, Ferocious, The Dark Truth which Kim co-produced and starred in along side Forrest Whitaker and Andy Garcia,Kim is currently filming Crossing Lines in Prague with William Fichtner and Donald Sutherland.Kim currently resides in Los Angeles with his wife and their two children. - IMDb Mini Biography By: Adam Stutt

Amazon Video has the most number of Kim Coates’s flixes, followed by Vudu compared to other streaming platforms. See the full graph below.

On average the IMDB score of the movies that Kim Coates has worked on is 5.4.

A dramatization of the life and death of Montreal mob boss Vito Rizzuto.

Cold Brook is the story of two ordinary guys in a small town who embark on an extraordinary adventure. It's a story about coming home; something everyone, everywhere has an innate desire to do.

A remote Alaskan town that has been overrun by paranormal forces and local outcast Roman Mercer (Jogia) must overcome the town's prejudices and his own personal demons if he's to harness ...

A veteran FBI agent negotiates the release of a bus-load of hearing-impaired school-children taken hostage by 3 desperate escaped convicts.

Based upon a true story. Wife with young family finds life becoming unbearable with her successful, but violent and abusive, husband. After filing for divorce, she quickly learns that her ...

A poignant, lyrical drama about a mother (Hunter), who, in an effort to deal with the grief over the death of her son, travels the back roads of the deep south to settle a score. A story of...

After a publisher changes a writer's debut novel about a deadly assassin from fiction to non-fiction, the author finds himself thrust into the world of his lead character, and must take on the role of his character for his own survival.