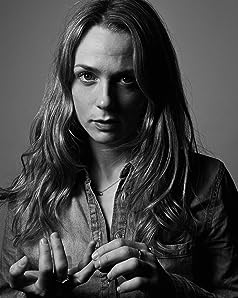 Kerry Condon is an Irish television and film actress, best known for her role as Octavia of the Julii in the HBO/BBC series Rome, as Stacey Ehrmantraut in AMC's Better Call Saul, and as the voice of F.R.I.D.A.Y. in various films in the Marvel Cinematic Universe. She is also the youngest actress ever to play Ophelia in a Royal Shakespeare Company production of Hamlet. She appeared in AMC's The Walking Dead in "30 Days Without an Accident".In 2001, at the age of 19, Condon originated the role of Mairead in The Lieutenant of Inishmore by Martin McDonagh which she performed at the Royal Shakespeare Company and in 2006 at the Lyceum Theatre in New York. For this production she recorded the song "The Patriot Game" with The Pogues. That same year, Condon played the role of Ophelia in Hamlet, making her the youngest actress to ever play that role for the RSC. In 2009, she appeared in another play by Martin McDonagh, The Cripple of Inishmaan, for which she won a Lucille Lortel award and a Drama Desk Award.Condon's movie roles include Kate Kelly, Ned Kelly's outlaw sister, in 2003's Ned Kelly and an appearance in the 2003 Irish independent film Intermission with Cillian Murphy, Kelly Macdonald, and Colin Farrell. She was in the 2005 Jet Li action-thriller Unleashed. She then appeared as Masha, a Tolstoian, in The Last Station, a film about the last months of Tolstoy's life with Helen Mirren and Christopher Plummer before playing jockey Rosie Shanahan in 2012's Luck. She voices the artificial intelligence F.R.I.D.A.Y., Tony Stark's replacement for J.A.R.V.I.S. in the Marvel Studios films Avengers: Age of Ultron, Captain America: Civil War, Spider-Man: Homecoming, Avengers: Infinity War, and Avengers: Endgame.In 2005 Condon co-starred as Octavia of the Julii, sister of the Roman Emperor Augustus, in the HBO/BBC series Rome. Condon became known for her frequent nude scenes on the show, in particular an explicit full frontal scene where her character is undressed by attendants, being left in only a green loincloth before this is removed, showing full frontal nudity. Condon appeared in the Season Four premiere of the post-apocalyptic zombie drama The Walking Dead playing the role of the character Clara, which aired 13 October 2013. - IMDb Mini Biography By: ahmetkozan

Amazon Video has the most number of Kerry Condon’s flixes, followed by Vudu compared to other streaming platforms. See the full graph below.

On average the IMDB score of the movies that Kerry Condon has worked on is 6.3.

The trials and tribulations of criminal lawyer Jimmy McGill in the time before he established his strip-mall law office in Albuquerque, New Mexico.

A down-to-earth account of the lives of both illustrious and ordinary Romans set in the last days of the Roman Republic.

A relationship forms between a gifted young girl and a man sprung from prison who has been tasked with protecting her from the evil elements that hunt her power.

A man enslaved by the mob since childhood and raised into behaving like a human attack dog escapes his captors and attempts to start a new life.

An offbeat comedy about an estranged father who returns to his hometown after an absence of ten years in order to reconnect with his daughter and ex-wife but unwittingly finds himself responsible for almost destroying all their lives.

The citizens of Ireland's County Cork come to the aid of a South American pilot who has crash landed in their town.

A pair of burglars stumble upon a woman being held captive in a home they intended to rob.