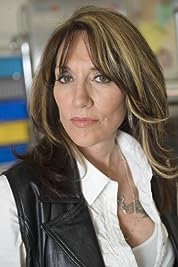 An extremely gifted, versatile performer adept at both comedy and drama, actress/singer Katey Sagal became a household name in the late 1980s as the fabulously brazen, undomesticated Peg Bundy on the enduring Fox series Matrimonio con hijos (1987). During its lengthy run she received three Golden Globe and two American Comedy Award nominations. As popular and identifiable as her Peg Bundy persona was, Katey assertively moved on after the show went off the air, not only starring in other sitcoms and television movies, but portraying characters that were polar opposites of the outrageous role that first earned her nationwide attention. For example, in 2008 she took on the role of Gemma Teller Morrow, the matriarch of a Hell's- Angels-esque California biker gang, on the series Hijos de la anarquía (2008), and in 2011 her portrayal earned her a Golden Globe Award for Best Performance by an Actress in a Television Series - Drama.In addition to her busy on-camera scheduling, Katey has retraced her steps to her first love: singing and songwriting. With the support of her record label Valley Entertainment, she released the album "Room" in 2004 that combined classics like "Feel a Whole Lot Better" and "(For the Love of) Money" with original songs she penned, including "Life Goes Round," "Daddy's Girl," and "Wish I Were a Kid." "Room" is her first CD since her 1994 debut "Well."Catherine Louise Sagal was born to director and singer Sara Zwilling and noted television and film director Boris Sagal. She began performing at age 5 and studied voice and acting at the California Institute of the Arts in Valencia, California. A singing waitress during her "salad" years, she started performing with the band "The Group With No Name," then caught a break after hooking up with Gene Simmons and his 1970s rock band KISS. In the meantime, she gained valuable experience as a backup recording singer for Simmons and other established stars like Bob Dylan, Olivia Newton-John, Etta James, and Tanya Tucker. She was also dynamic performing live with diva Bette Midler as one of her "Harlettes" in Bette's wildly avant-garde stage shows during the late 1970s and early 1980s.In 1985, while performing on stage in a musical, she was spotted by talent agents who subsequently cast her as Mary Tyler Moore's feisty co-worker Jo Tucker in Mary (1985), a short-lived comedy series. From that point on she focused on film and television. In 1987, she won the role of Peg Bundy in Matrimonio con hijos (1987), and the rest is history.In her post-Bundy career, Katey has continued to demonstrate a strong range, playing a much more responsible parent in the popular sitcom No con mis hijas (2002), co-starring the late John Ritter and valiantly moving to single-household-head after Ritter's sudden passing in 2003 with highly successful results. She has earned earned equally-fine kudos for her television movies like Amor de conveniencia (1998), a charming romantic comedy that also co-starred John Ritter, Amor incondicional (1999), a tearjerker in which she played a dying mother, and the Disney offerings Hogar, inteligente hogar (1999) and El maravilloso mundo de Disney: Señora directora (1998). The voice of Turanga Leela, the beautiful one-eyed sewer mutant in the animated series Futurama (1999), she has also guested on Entre fantasmas (2005), Perdidos (2004), Boston Legal (2004), C.S.I. (2000), and Eli Stone (2008). Feature films have included Su excelencia, la criada (1987), El precio de la pasión (1988), the Sundance Film Festival favorite Dropping Out (2000), Following Tildy (2002), and the indie I'm Reed Fish (2006). More recently, she played Jack's mother in a live action/adventure retelling of Jack y las judías mágicas (2009) that also featured the talents of Christopher Lloyd, James Earl Jones, and Chevy Chase.Katey resides in the Los Angeles area with husband writer/producer/director/creator Kurt Sutter, whose acclaimed work includes The Shield: Al margen de la ley (2002) and the offbeat Hijos de la anarquía (2008), which Sutter created, in which she was intriguingly cast as a motorcycle-club family matriarch. They share their home with three children: Sarah, Jackson, and Esme; and three dogs: Lumpy, Lola and Blue. - IMDb Mini Biography By: Gary Brumburgh / gr-home@pacbell.net

Amazon Video has the most number of Katey Sagal’s flixes, followed by Google Play Movies compared to other streaming platforms. See the full graph below.

On average the IMDB score of the movies that Katey Sagal has worked on is 6.5.

Al Bundy is a misanthropic women's shoe salesman with a miserable life. He hates his job, his wife is lazy, his son is dysfunctional (especially with women), and his daughter is dim-witted and promiscuous.

In Mary, this time Moore is a forty something divorcee, Mary Brenner, working at a seedy tabloid, the Chicago Eagle. After being a writer at a fashion magazine that went out of business, ...

The Hennessy clan -- mother Cate, daughters Bridget and Kerry, and son Rory -- look to one another for guidance and support after the death of Paul, the family patriarch. Cate's parents lend a hand.

The inspirational story of World Champion Boxer Vinny Pazienza who, after a near fatal car crash which left him not knowing if he'd ever walk again, made one of sport's most incredible comebacks.