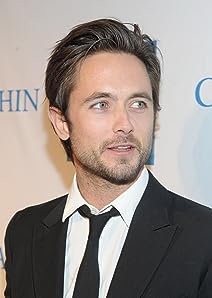 On the big screen, Chatwin recently appeared in Warner Bros.' Dax Shepard-directed feature, CHIPS, in which he stars opposite Vincent D'Onofrio And Michael Pena. He has also wrapped production on four independent films: THE SCENT OF RAN & LIGHTENING, along with Maika Monroe, Maggie Grace and Will Patton; the quirky comedy, UNLEASHED, opposite Kate Micucci, Steve Howey and Sean Astin; the romantic comedy NO STRANGER THAN LOVE, along with Alison Brie and Colin Hanks; and the independent drama WE DON'T BELONG HERE, in which he stars alongside Catherine Keener, Anton Yelchin, Cary Elwes and Maya Rudolph. He will next be seen in the independent drug thriller, URGE, opposite Pierce Brosnan.Chatwin's additional film credits include BANG BANG BABY (TIFF, 2014) with Jane Levy; FUNKYTOWN, in which he starred opposite Patrick Huard and Paul Doucet; DRAGONBALL, the film adaptation of the Japanese manga phenomenon; John Stockwell's romantic comedy MIDDLE OF NOWHERE, also starring Susan Sarandon and Eva Amurri; THE INVISIBLE, with Marcia Gay Harden; Steven Spielberg's re-telling of the H.G. Wells classic, WAR OF THE WORLDS, in which he starred opposite Tom Cruise and Dakota Fanning; the independent film THE CHUMSCRUBBER, also starring Ralph Fiennes, Glenn Close, Rita Wilson and Allison Janney; and TAKING LIVES with Angelina Jolie and Ethan Hawke.Recently, Chatwin appeared in the dr. Who Christmas special as "the ghost" along side Peter Capaldi and Matt Lucas as well as The CBS summer series "American Gothic". Chatwin is perhaps best known for his role as "Jimmy/Steve" on the critically-acclaimed Showtime drama series "Shameless." He was seen in BBC America's hit series, "Orphan Black" in which he played savvy drug-dealer, Jason Kellerman. Chatwin first garnered recognition for his starring role in the in the USA miniseries, "Traffic," directed by Stephen Hopkins. Based on his performance in the program, Newsweek magazine singled him out as an "Actor to Watch." Additional television credits include roles on "Lost" and "Weeds."Chatwin was born and raised on Vancouver Island, British Columbia. Besides acting, his passion sits with environmental and social issues. As well as motorcycles. - IMDb Mini Biography By: Charlie Crowe

Amazon Video has the most number of Justin Chatwin’s flixes, followed by Vudu compared to other streaming platforms. See the full graph below.

On average the IMDB score of the movies that Justin Chatwin has worked on is 5.4.

The members of a prominent Boston family suspect that one of their own is working with an infamous serial killer.

When a cosmic event turns Emma's dog and cat into two perfect guys, Emma reconsiders her outlook on dating, hilariously works out her trust issues, and ultimately learns to love herself.

1976. Montreal. Eight people who wanted to see and be seen at the trendiest disco will be juggling fame and anonymity until they will be forced to make sober choices in an era when excess was the norm, and when disco was king.

A teenager is left invisible to the living after an attack.

Past and present collide when two couples explore love over the course of one night at a hotel.

Astronaut Niko Breckenridge and her young crew face unimaginable danger as they go on a high-risk mission to explore the genesis of an alien artifact.

A rookie detective, son of a dead disgraced cop, works to solve his first major case while under the watchful eye of a ghost-like assassin.