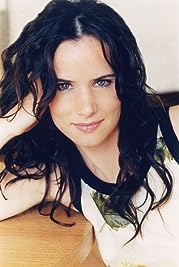 Juliette Lewis has been recognized as one of Hollywood's most talented and versatile actors of her generation since she first stunned audiences and critics alike with her Oscar-nominated performance as "Danielle Bowden" in Cape Fear (1991). To date, she has worked with some of the most revered directors in the industry, including Martin Scorsese, Woody Allen, Lasse Hallström, Oliver Stone and Garry Marshall. Whether lending dramatic authenticity or a natural comedic flair to her roles, Lewis graces the screen with remarkable range and an original and captivating style.Lewis was born in Los Angeles, Californa, to Glenis (Duggan) Batley, a graphic designer, and Geoffrey Lewis, an actor. By the age of six, she knew she wanted to be a performer. At twelve, Lewis landed her first leading role in the Showtime miniseries Home Fires (1987). After appearing in several TV sitcoms including The Wonder Years (1988), she made her move to film, starring with Chevy Chase in National Lampoon's National Lampoon's Christmas Vacation (1989) and with Jennifer Jason Leigh in the drama Crooked Hearts (1991). At 16, Lewis starred opposite Brad Pitt in the critically acclaimed television movie Too Young to Die? (1990), catching the attention of Martin Scorsese, who cast her in his thriller Cape Fear (1991). Her powerful scenes with Robert De Niro captured the quiet complexities of adolescence and earned her an Oscar nomination and Golden Globe nomination for "Best Supporting Actress". Her auditorium scene with De Niro went down in movie history as one of cinema's classic scenes.Lewis next worked with Woody Allen in Husbands and Wives (1992), playing a self-assured college coed with a penchant for older men and, particularly, her married professor. She quickly followed suit with a succession of starring roles in a variety of blockbusters and critically acclaimed projects including Kalifornia (1993), Romeo Is Bleeding (1993), What's Eating Gilbert Grape (1993) and Natural Born Killers (1994), Oliver Stone's controversial media satire about two mass murderers who become legendary folk heroes. Lewis's other credits include the Nora Ephron comedy Mixed Nuts (1994), with Steve Martin and Adam Sandler; the sci-fi action film Strange Days (1995) with Ralph Fiennes and Angela Bassett; Quentin Tarantino's vampire tale From Dusk Till Dawn (1996) with George Clooney; The Evening Star (1996) with Shirley MacLaine; the Garry Marshall-directed The Other Sister (1999), and Todd Phillips' Old School (2003), co-starring opposite Luke Wilson, Vince Vaughn, and Will Ferrell as well as Starsky & Hutch (2004). In addition to her film career, Lewis has continued to add roles to her growing list of television credits with a performance in Showtime's My Louisiana Sky (2001), for which she secured an EMMY nomination, and a starring role in the Mira Nair-directed HBO's film Hysterical Blindness (2002), alongside Uma Thurman and Gena Rowlands.After a six-year hiatus from film to pursue her burgeoning music career exclusively, Lewis announced her return to acting with a handful of upcoming movies. Juliette starred alongside Ellen Page, Marcia Gay Harden, Kristen Wiig and Jimmy Fallon in the comedy Whip It (2009). The film was released by Fox Searchlight on October 2nd, 2009. Directed by Drew Barrymore, the film tells the story of an ex-beauty pageant contestant that leaves her crowns behind after joining a roller derby team. Lewis plays "Iron Maven", the star of a top derby team. Next, she joined the cast of the acclaimed European animated thriller Metropia (2009), as the voice of "Nina". She also appeared in the romantic comedy The Switch (2010), opposite Jennifer Aniston, Jason Bateman and Patrick Wilson. The film tells the story of a single mother (Aniston) who decides to have a child using a sperm donor. Juliette plays "Debbie Epstein", the best friend of Aniston's character. Lewis also appears in Sympathy for Delicious (2010), Mark Ruffalo's directorial debut. The film follows a paralyzed DJ, struggling to survive on the streets of LA who turns to faith healing and mysteriously develops the ability to cure the sick. Juliette plays "Ariel", costarring alongside Orlando Bloom, Mark Ruffalo and Laura Linney. The film took home the US Dramatic Special Jury Prize at the 2010 Sundance Film Festival. Most recently, Juliette Lewis appears in the indie-drama Conviction (2010), which stars Hilary Swank, Melissa Leo, Minnie Driver and Sam Rockwell. She plays "Roseanna Perry" in the true story of an unemployed single mother (Swank) who saw her brother begin serving a life sentence in 1983 for murder and robbery. The role has won Lewis praise from audiences and critics, alike, for her performance, with USA Today saying, "Juliette Lewis has an indelible role" and the San Francisco Chronicle saying "Her character work should be studied in schools. Just remarkable". In addition to Conviction (2010), Lewis also makes a cameo in Todd Phillips' comedy, Due Date (2010), starring Robert Downey Jr., Michelle Monaghan and Zach Galifianakis.Beginning in 2004, Juliette took a hiatus from acting to embark on a musical journey. After six years, two full length albums and countless high profile tours and festival gigs with her band, 'Juliette & the Licks', Juliette set out on a solo career. Releasing "Terra Incognita" last fall, the album has taken her all across the world from Europe to Japan to Turkey, Australia, North America and Canada. For more information on Juliette Lewis' music, please visit her MySpace page. Juliette Lewis resides in Los Angeles. - IMDb Mini Biography By: Press Here Publicity

Amazon Video has the most number of Juliette Lewis’s flixes, followed by Vudu compared to other streaming platforms. See the full graph below.

On average the IMDB score of the movies that Juliette Lewis has worked on is 6.5.

A young man in a small Midwestern town struggles to care for his mentally-disabled younger brother and morbidly obese mother while attempting to pursue his own happiness.

Each series, a detective focuses on the prime suspect in a murder case; but everyone has something to hide.

The Griswold family's plans for a big family Christmas predictably turn into a big disaster.

A convicted rapist, released from prison after serving a fourteen-year sentence, stalks the family of the lawyer who originally defended him.

A look at the lives of the strong-willed women of the Weston family, whose paths have diverged until a family crisis brings them back to the Oklahoma house they grew up in, and to the dysfunctional woman who raised them.

Action,Crime,Horror
From Dusk Till Dawn (1996)

Two criminals and their hostages unknowingly seek temporary refuge in a truck stop populated by vampires, with chaotic results.

Defense Attorney Mitch McDeere is targeted for execution by the Chicago Mob in retaliation for bringing down a profitable Mob-operated Memphis law firm ten years earlier.