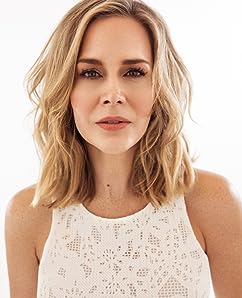 Julie Benz was born in Pittsburgh, Pennsylvania, USA on May 1, 1972. Julie's father is a Pittsburgh surgeon and her mother is a figure ice skater. The family settled in nearby Murrysville, when Julie was two, and she started ice skating at age three. She competed in the 1988 U.S. Championships in junior ice dancing with her partner David Schilling, coming in 13th. Her older brother and sister, Jeffrey and Jennifer, were in the 1987 U.S. Junior Champions in ice dancing and competed internationally. When Julie was 14, she had a bad stress fracture and had to take time off.By 1989, with her figure skating career over, Julie turned to acting and got involved in the local theater where she got a role in the play "Street Law". Her first movie role was a small, credited, speaking part on in the Black Cat episode in the Dario Argento/George A. Romero co-direction horror flick, Due occhi diabolici (1990) playing in one scene alongside Harvey Keitel. A year later, she got a role on a TV show called Hi Honey, I'm Home (1991).After graduating from high school, Julie entered New York University to study acting there. After graduation, Julie moved to Los Angeles to further pursue her career and landed some small roles in movies and TV shows including a guest appearance on Married with Children (1987) and in the Aaron Spelling TV pilot Crosstown Traffic (1995).In 1996, Julie auditioned for the role of "Buffy" in the series Buffy the Vampire Slayer (1997), but lost out to Sarah Michelle Gellar. However, she was offered a small role as a vampire girl in which she did such a good job that her part was expanded to a few more episodes in playing the vampire "Darla". With that, Julie Benz's career had finally taken off. She reprised her role as "Darla" in the Buffy spin-off series Angel (1999) for two years and has had several small roles in various film productions. She also had a small, but memorable, role playing a receptionist in the movie As Good as It Gets (1997).Even after her role on Angel (1999) wrapped up, Julie continued to find work on television in playing many guest staring roles in numerous popular TV shows from CSI: Crime Scene Investigation (2000), to Supernatural (2005), to playing the lead and supporting roles in various made-for-TV movies. She landed another notable role on the TV-cable series Dexter (2006) playing "Rita", a troubled divorcée and lover of the title character played by Michael C. Hall. Benz played a leading role in the tv series No Ordinary Family (2010) playing Stephanie Powell along with actors Michael Chiklis, Kay Panabaker, Jimmy Bennett, Autumn Reeser, Romany Malco, and Stephen Collins.In 2013, she had the starring role in the sci-fi / fantasy breakout hit show Defiance (2013). - IMDb Mini Biography By: matt-282 and Robert Harris

Amazon Video has the most number of Julie Benz’s flixes, followed by Vudu compared to other streaming platforms. See the full graph below.

On average the IMDB score of the movies that Julie Benz has worked on is 5.9.

By day, mild-mannered Dexter is a blood-spatter analyst for the Miami police. But at night, he is a serial killer who only targets other murderers.

Comedy
On Becoming a God in Central Florida (2019)

In 1992 Central Florida, a minimum-wage water park employee lies, schemes, and cons her way up the ranks of the cultish, multibillion-dollar pyramid scheme that drove her family to ruin.

In Thailand, John Rambo joins a group of mercenaries to venture into war-torn Burma, and rescue a group of Christian aid workers who were kidnapped by the ruthless local infantry unit.

Life in the city of Defiance, in a near future after the arrival of different alien lifeforms to Earth.

The Powells are a typical American family living in Pacific Bay, California, whose members gain special powers after their plane crashes in the Amazon.

A widow of a war hero takes in an injured soldier who has just returned from Afghanistan. Together they help each other heal and find true love.