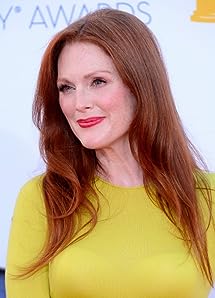 Julianne Moore was born Julie Anne Smith in Fort Bragg, North Carolina on December 3, 1960, the daughter of Anne (Love), a social worker, and Peter Moore Smith, a paratrooper, colonel, and later military judge. Her mother moved to the U.S. in 1951, from Greenock, Scotland. Her father, from Burlington, New Jersey, has German, Irish, Welsh, German-Jewish, and English ancestry.Moore spent the early years of her life in over two dozen locations around the world with her parents, during her father's military career. She finally found her place at Boston University, where she earned her Bachelor of Fine Arts (B.F.A.) degree in acting from the School of the Performing Arts. After graduation (in 1983), She took the stage name "Julianne Moore" because there was another actress named "Julie Anne Smith". Julianne moved to New York and worked extensively in theater, including appearances off-Broadway in two Caryl Churchill plays, Serious Money and Ice Cream With Hot Fudge and as Ophelia in Hamlet at The Guthrie Theatre. But despite her formal training, Julianne fell into the attractive actress' trap of the mid-1980's: TV soaps and miniseries. She appeared briefly in the daytime serial The Edge of Night (1956) and from 1985 to 1988 she played two half-sisters Frannie and Sabrina on the soap As the World Turns (1956). This performance later led to an Outstanding Ingénue Daytime Emmy Award in 1988. Her subsequent appearances were in mostly forgettable TV-movies, such as Money, Power, Murder. (1989), The Last to Go (1991) and Halálos igézet (1991).She made her entrance into the big screen with 1990's Történetek a sötét oldalról (1990), where she played the victim of a mummy. Two years later, Julianne appeared in feature films with supporting parts in A kéz, amely a bölcsőt ringatja (1992) and the comedy Mordály a tarsolyomban (1992). She kept winning better and more powerful roles as time went on, including a small but memorable role as a doctor who spots Kimble Harrison Ford and attempts to thwart his escape in A szökevény (1993). (A role that made such an impression on Steven Spielberg that he cast her in the Jurassic Park (1993) sequel without an audition in 1997). In one of Moore's most distinguished performances, she recapitulated her "beguiling Yelena" from Andre Gregory's workshop version of Chekhov's Uncle Vanya in Louis Malle's critically acclaimed Ványa a 42. utcában (1994). Director Todd Haynes gave Julianne her first opportunity to take on a lead role in Elkülönítve (1995). Her portrayal of Carol White, an affluent L.A. housewife who develops an inexplicable allergic reaction to her environment, won critical praise as well as an Independent Spirit Award nomination.Later that year she found her way into romantic comedy, co-starring as Hugh Grant's pregnant girlfriend in Áldatlan állapotban (1995). Following films included Bérgyilkosok (1995), where she played an electronics security expert targeted for death (next to Sylvester Stallone and Antonio Banderas) and Túlélni Picassót (1996), where she played Dora Maar, one of the numerous lovers of Picasso (portrayed by her hero, Anthony Hopkins). A year later, after co-starring in Spielberg's Az elveszett világ: Jurassic Park (1997), opposite Jeff Goldblum, a young and unknown director, Paul Thomas Anderson asked Julianne to appear in his movie, Boogie Nights (1997). Despite her misgivings, she finally was won over by the script and her decision to play the role of Amber Waves, a loving porn star who acts as a mother figure to a ragtag crew, proved to be a wise one, since she received both Golden Globe and Academy Award nominations. Julianne started 1998 by playing an erotic artist in A nagy Lebowski (1998), continued with a small role in the social comedy Chicagói taxi (1997) and ended with a subtle performance in Gus Van Sant's remake of Psycho (1960). 1999 had Moore as busy as an actress can be.As the century closed, Julianne starred in a number of high-profile projects, beginning with Robert Altman's Cuki hagyatéka (1999) , in which she was cast as the mentally challenged but adorable sister of a decidedly unhinged Glenn Close. A portrayal of the scheming Mrs. Cheveley followed in Oliver Parker's Az eszményi férj (1999) with a number of critics asserting that Moore was the best part of the movie. She then enjoyed another collaboration with director Anderson in Magnólia (1999) and continued with an outstanding performance in Egy kapcsolat vége (1999), for which she garnered another Oscar nomination. She ended 1999 with another great performance, that of a grieving mother in Világtérkép (1999), opposite Sigourney Weaver. - IMDb Mini Biography By: Catherine Grace

Amazon Video has the most number of Julianne Moore’s flixes, followed by Google Play Movies compared to other streaming platforms. See the full graph below.

On average the IMDB score of the movies that Julianne Moore has worked on is 6.6.

Jeff "The Dude" Lebowski, mistaken for a millionaire of the same name, seeks restitution for his ruined rug and enlists his bowling buddies to help get it.

Ever wonder what's happening inside your head? From dreaming to anxiety disorders, discover how your brain works with this illuminating series.

An epic mosaic of interrelated characters in search of love, forgiveness, and meaning in the San Fernando Valley.

In 2027, in a chaotic world in which women have become somehow infertile, a former activist agrees to help transport a miraculously pregnant woman to a sanctuary at sea.

The story of a young man's adventures in the California pornography industry of the late 1970s and early 1980s.

Dr. Richard Kimble, unjustly accused of murdering his wife, must find the real killer while being the target of a nationwide manhunt led by a seasoned U.S. Marshal.

Documentary,Reality-TV
Visionaries: Inside the Creative Mind (2011)

A linguistics professor and her family find their bonds tested when she is diagnosed with Alzheimer's Disease.