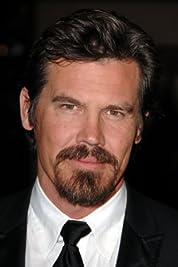 Rugged features and a natural charm have worked for Josh Brolin, the son of actor James Brolin. He has played roles as a policeman, a hunter, and the President of the United States.Brolin was born February 12, 1968 in Santa Monica, California, to Jane Cameron (Agee), a Texas-born wildlife activist, and James Brolin. Josh was not interested at first in the lifestyle of the entertainment business, in light of his parents' divorce, and both of them being actors. However, during junior year in high school, he took an acting class to see what it was like. He played Stanley in "A Streetcar Named Desire" and became hooked. His first major screen role was as the older brother in the film Die Goonies (1985), based on a story by Steven Spielberg. He then immediately moved on to work on television, taking roles on such series as Private Eye: Pilot (1987) and The Young Riders (1989). "Private Eye" was a chance for Brolin to play a detective. "The Young Riders" was set just before the Civil War, and was co-directed by Brolin's father, James Brolin.After The Young Riders (1989), Brolin moved back to the big screen, with mediocre success. He played a supporting role in Roadflower (1994), but the film was not a success. He followed up with the crime film Killer Cops - Mörder in Uniform (1996), the romantic film Das Rosenbett (1996), the thriller film Freeze - Alptraum Nachtwache (1997), and appeared with his father in Brothers in Arms (1997). However, nothing truly stuck out, especially not the box office flop Mod Squad - Cops auf Zeit (1999). The 2000s initially brought no significant change in Brolin's career. He appeared in the independent film Slow Burn - In der Hitze der Wüste (2000), the sci-if thriller Hollow Man - Unsichtbare Gefahr (2000) and starred on the television series Mister Sterling (2003). In 2004, he married actress Diane Lane and are still together.It was not until 2007 that Brolin received much acclaim for his films. He took a supporting role in the Quentin Tarantino-written Grindhouse (2007) which was a two-part film accounting two horror stories. He also played two policemen that year: corrupt officer Nick Trupo in the crime epic American Gangster (2007), and an honest police chief in the emotional drama Im Tal von Elah (2007) which starred Tommy Lee Jones and was directed by Paul Haggis. However, it was his involvement in No Country for Old Men (2007) that truly pushed him into the limelight. The film, directed by the Coen brothers, was about a man (Brolin) who finds a satchel containing two million dollars in cash. He is pursued by an unstoppable assassin (Javier Bardem, who won an Oscar for his work) and his friend, a local sheriff (Tommy Lee Jones). The film won four Oscars, including Best Picture and Best Director.Brolin found high-profile work the next year, being cast as Supervisor Dan White in the film Milk (2008). His performance as the weak and bitter politician earned him an Oscar nomination, and Brolin received more praise for his fascinating portrayal of George W. Bush in the Oliver Stone film W.: Ein missverstandenes Leben (2008). Despite the mediocre success of W.: Ein missverstandenes Leben (2008), he was recognized as the best part of the film, and Milk (2008) was another triumph, critically and commercially.Brolin then acted in the smaller comedy Women in Trouble (2009) before landing a number of large roles in 2010. The first of these was the film based on the comic book figure Jonah Hex (2010). The film was a box office flop and critically panned, but Brolin also forged a second collaboration with legendary director Oliver Stone for Wall Street: Geld schläft nicht (2010). Brolin played a large role alongside such young stars as Carey Mulligan and Shia LaBeouf, and older thespians such as Michael Douglas, Eli Wallach, and Frank Langella. Brolin's character was Bretton James, a top banker in the film, and also the film's chief antagonist. Brolin also appeared in Woody Allen's London-based film Ich sehe den Mann deiner Träume (2010) and a second collaboration with the Coen Brothers, which was a remake of Der Marshal (1969).Despite his earlier mediocre success and fame, Brolin has maintained a choosiness in his films and, recently, these choices have paid off profoundly. Hopefully, he continues this streak of good fortune that his talents have finally given him. - IMDb Mini Biography By: Bob Stage

Amazon Video has the most number of Josh Brolin’s flixes, followed by Vudu compared to other streaming platforms. See the full graph below.

On average the IMDB score of the movies that Josh Brolin has worked on is 6.7.

Crime,Drama,Thriller
No Country for Old Men (2007)

Violence and mayhem ensue after a hunter stumbles upon a drug deal gone wrong and more than two million dollars in cash near the Rio Grande.

The true story of Lt. Col. Edwin P. Ramsey, who in 1942 led the last cavalry charge in U.S. army history, and commanded more than 40,000 guerrilla troops against the Japanese.

Explores the grit and glory in the wilds of North America, Central America and South America.

The definitive, adrenaline-soaked story of the birth and boom of the most extreme sport on the planet: Freestyle Motocross.

Pat Tillman never thought of himself as a hero. His choice to leave a multimillion-dollar football contract and join the military wasn't done for any reason other than he felt it was the ...

Foul-mouthed mutant mercenary Wade Wilson (a.k.a. Deadpool), brings together a team of fellow mutant rogues to protect a young boy with supernatural abilities from the brutal, time-traveling cyborg Cable.

Documentary,History
Mankind the Story of All of Us (2012)

Follow-up to America: The Story of Us (2010). Mankind embraces a groundbreaking way of telling this epic human story. Drawing on a growing global interest in a revelatory field of history, ...