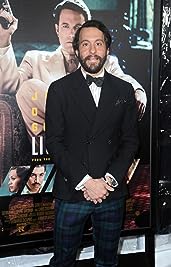 Jonathan Kite is an American actor and comedian from Skokie, IL, who has a Bachelor of Fine Arts degree in Theatre from the University of Illinois at Urbana-Champaign.Best known as "Oleg," the hilarious, lovable, sex-crazed Ukrainian cook, opposite Kat Dennings and Beth Behrs on the CBS hit comedy, "2 Broke Girls," Kite credits Wilt Chamberlin and Ukrainian porn star Vlad the Impaler as major influences when he created his character.In addition, he has been seen in a number of notable supporting roles on television including CBS's "NCIS", and FOX's "Family Guy", "American Dad", "Raising Hope", and the Jamie Foxx produced sketch show "In the Flow with Affion Crockett", Netflix's "Boss Baby" and "Cleopatra In Space", and Adult Swim's, "Black Dynamite: The Animated Series" where he voiced many of the color impaired characters. When asked to list them, Kite simply said "just call me 'Every White' ".He recently completed the indie comedy "The Bellman" and is enjoying Alabama's southern charm while filming the teen sex romp, "Supercool".Other film credits include "Smallfoot" for Warner Brothers, "All The Creatures Were Stirring", and "Someday Hero".Aside from a busy acting career, Kite is an expert impressionist boasting over 120 celebrity impressions including: Christian Bale, Anthony Bourdain, Jeff Bridges, Adam Driver, Robert Downey Jr., Tom Hanks, John Lithgow, Ryan Reynolds, Seth Rogen and Vince Vaughn.He is also a national and international headlining comedian having performed in top clubs all over the world. He recently filmed his first stand up comedy special,"Jonathan Kite's Back to School Special" at his high school alma mater Niles North, where it all began.Kite has also studied improvisation and sketch comedy with Chicago's Second City and The Groundlings in Los Angeles. Kite is a founding member of the improv group, L. Ron Jeremy, which set the national Cage Match Competition record at the Improv Olympic West Theater, winning 52 weeks in a row and then retiring undefeated. - IMDb Mini Biography By: Jordyn Palos

Amazon Video has the most number of Jonathan Kite’s flixes, followed by DIRECTV compared to other streaming platforms. See the full graph below.

On average the IMDB score of the movies that Jonathan Kite has worked on is 6.1.

Two young women waitressing at a greasy spoon diner strike up an unlikely friendship in the hopes of launching a successful business - if only they can raise the cash.

Horror
All the Creatures Were Stirring (2018)

When an awkward date on Christmas Eve leads a couple into a strange theater, they're treated to a bizarre and frightening collection of Christmas stories, featuring a wide ensemble of characters doing their best to avoid the horrors of the holidays. From boring office parties and last-minute shopping, to vengeful stalkers and immortal demons, there's plenty out there to fear this holiday season.