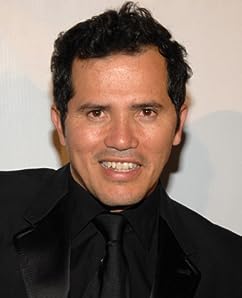 Fast-talking and feisty-looking John Leguizamo has continued to impress movie audiences with his versatility: he can play sensitive and naive young men, such as Johnny in Hangin' with the Homeboys (1991); cold-blooded killers like Benny Blanco in Carlito's Way (1993); a heroic Army Green Beret, stopping aerial terrorists in Executive Decision (1996); and drag queen Chi-Chi Rodriguez in To Wong Foo Thanks for Everything, Julie Newmar (1995). Arguably, not since ill-fated actor and comedian Freddie Prinze starred in the smash TV series Chico and the Man (1974) has a youthful Latino personality had such a powerful impact on critics and fans alike.Leguizamo was born July 22, 1964, in Bogotá, Colombia, to Luz and Alberto Leguizamo. He was four when his family emigrated to the United States. He was raised in Queens, New York, attended New York University and studied under legendary acting coach Lee Strasberg for only one day before Strasberg passed away. The extroverted Leguizamo started working the comedy club circuit in New York and first appeared in front of the cameras in an episode of Miami Vice (1984). His first film appearance was a small part in Mixed Blood (1984), and he had minor roles in Casualties of War (1989) and Die Hard 2 (1990) before playing a liquor store thief who shoots Harrison Ford in Regarding Henry (1991). His career really started to soar after his first-rate performance in the independent film Hangin' with the Homeboys (1991) as a nervous young teenager from the Bronx out for a night in brightly lit Manhattan with his buddies, facing the career choice of staying in a supermarket or heading off to college and finding out that the girl he loves from afar isn't quite what he thought she was.The year 1991 was also memorable for other reasons, as he hit the stage with his show John Leguizamo: Mambo Mouth (1991), in which he portrayed seven different Latino characters. The witty and incisive show was a smash hit and won the Obie and Outer Circle Critics Award, and later was filmed for HBO, where it picked up a CableACE Award. He returned to the stage two years later with another satirical production poking fun at Latino stereotypes titled John Leguizamo: Spic-O-Rama (1993). It played in Chicago and New York, and won the Drama Desk Award and four CableACE Awards.In 1995 he created and starred in the short-lived TV series House of Buggin' (1995), an all-Latino-cast comedy variety show featuring hilarious sketches and comedic routines. The show scored two Emmy nominations and received positive reviews from critics, but it was canceled after only one season. The gifted Leguizamo was still keeping busy in films, with key appearances in Super Mario Bros. (1993), Romeo + Juliet (1996) and Spawn (1997). In 1998 he made his Broadway debut in John Leguizamo: Freak (1998), a "demi-semi-quasi-pseudo-autobiographical" one-man show, which was filmed for HBO by Spike Lee.Utilizing his distinctive vocal talents, he next voiced a pesky rat in Doctor Dolittle (1998) before appearing in the dynamic Spike Lee-directed Summer of Sam (1999) as a guilt-ridden womanizer, as the Genie of The Lamp in the exciting Arabian Nights (2000) and as Henri DE Toulouse Lautrec in the visually spectacular Moulin Rouge! (2001). He also voiced Sid in the animated Ice Age (2002), co-starred alongside Arnold Schwarzenegger in Collateral Damage (2002) and directed and starred in the boxing film Undefeated (2003). Afterward, Leguizamo starred in the remake of the John Carpenter hit Assault on Precinct 13 (2005) and George A. Romero's long-awaited fourth "Dead" film, Land of the Dead (2005). There can be no doubt that the remarkably talented Leguizamo has been a breakthrough performer for the Latino community in mainstream Hollywood, in much the same way that Sidney Poitier crashed through celluloid barriers for African-Americans in the early 1960s. Among his many strengths lies his ability to not take his ethnic background too seriously but also to take pride in his Latino heritage. He has opened many doors for his countrymen. A masterly and accomplished performer, movie audiences await Leguizamo's next exciting performance. - IMDb Mini Biography By: firehouse44@hotmail.com

Amazon Video has the most number of John Leguizamo’s flixes, followed by Vudu compared to other streaming platforms. See the full graph below.

On average the IMDB score of the movies that John Leguizamo has worked on is 6.2.

Biography,Crime,Drama
When They See Us (2019)

Five teens from Harlem become trapped in a nightmare when they're falsely accused of a brutal attack in Central Park. Based on the true story.

A Puerto Rican former convict, just released from prison, pledges to stay away from drugs and violence despite the pressure around him and lead on to a better life outside of N.Y.C.

A poet falls for a beautiful courtesan whom a jealous duke covets.

Latin History for Morons: John Leguizamo's Road to Broadway captures John's quest to cram 3,000 years of history into 90 minutes of stage time and bring a whole new set of historical ...

Set during the Ice Age, a sabertooth tiger, a sloth, and a wooly mammoth find a lost human infant, and they try to return him to his tribe.

To cure a Prince's murderous madness, Scheherezade tells him a series of wonderous stories.

A group of military veterans, who recently returned home from serving in Iraq, band together to pull off a major bank heist.

Two top baseball prospects in the Dominican Republic face fierce competition and corruption as they chase their big league dreams.