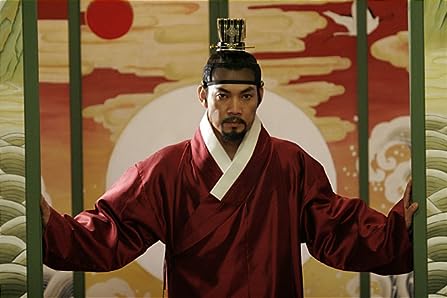 Jung Jin Young is a South Korean actor, born in the year 1964. He was born and raised in Seoul, and earned a Bachelor's Degree in Korean Language and Literature from Seoul National University, one of South Korea's most prestigious institutions.Building an interest in the arts, Jung Jin Young began acting through college theatre during his time at Seoul National University.The 1980s was a time of military dictatorship of Korea, and the tension between the government and resistance forces were at its peak. Under such political background, Jung Jin Young participated in an ideologically oriented left-wing play during his twenties, and also debuted in the film industry through a film titled "Opening the Closed School Door," which was banned from major screening by the government due to its story-line focusing on the foundation of the Korean Teachers & Educational Worker's Union.The actor successfully settled into the film industry through his performance in the 1998 hit film, "A Promise." Leaving a strong impression behind for audiences, Jung Jin Young eventually won the award for Best Male Supporting Actor in both the 19th Blue Dragon Awards and the 36th Daejong Film Festival.Jung Jin Young's breakthrough role came in the 2005 award winning film, "The King and the Clown." The actor appeared as the deranged king, Yeonsan-gun- of Korea's Joseon Dynasty, successfully providing audiences with a new perspective on the historical figure. The film was a major success, reaching an audience number of 10 million.The actor continued his success through the television industry also, starring in many dramas, such as "Country of Winds," "Brain," "The Glamorous Temptation," etc. Through his notable performances, the actor was presented with many nominations and awards.In addition to acting, Jung Jin Young also participated as a TV show host; most widely known for hosting the educational/cultural program, "Unsolved Mysteries," for 4 years, since the year 2002. He also participated as a host for the program, "Challenger," in 2011, and the final stage of popular variety show, "I am a Singer 2," in 2012.Of his many performances on screen, "A Promise (1998)," "Let's Play Dharma (2001)," "Wildcard (2003)," "The King and the Clown (2005)," "Bunt (2007)," "Battlefield Heroes (2010)," "Miracle in Cell No. 7 (2012)," "Ode to My Father (2014)," etc., are his most notable appearances. For television, the actor earned many awards for his performances in "Country of Winds (2008)," "Brain (2011)," and "The Glamorous Temptation (2015)." - IMDb Mini Biography By: FNC Entertainment

Rakuten Viki has the most number of Jin-young Jung’s flixes, followed by Amazon Video compared to other streaming platforms. See the full graph below.

On average the IMDB score of the movies that Jin-young Jung has worked on is 6.5.

Lee Kang Hoon (Shin Ha Kyun) is a talented neurosurgeon who graduated from a top medical school and works at the top hospital in Korea, Chunha University Hospital. He has ambitions to ...

As a chief of staff in the National Assembly, Jang Tae-jun influences power behind the scenes while pursuing his own ambitions to rise to the top.

Amid the time of Korean War, a young boy's vow to take care of his family marked the beginning of a lifelong promise spanning 60 years.

This drama tells the story of a family that is slowly starting to drift apart.

Love Rain is a story which takes place in two time periods, the first is in the 1970's which tells the love story of two university students Seo In-ha and Kim Yoon-Hee. After a series of ...

An action drama about people who struggle to change their fate, one of whom is an elite detective with great analyzing skills.

A melodrama about a man and a woman who are each other's first loves, but get separated at childhood due to a painful family situation and meet again 12 years later. Yoon Soo Wan is legally...

In a small Café, Min-hee Kim plays a guest who prefers to observe but not interact with the other guests herself.