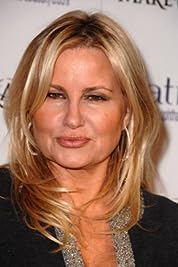 Jennifer Coolidge is a versatile character actress and experimental comedienne, best known for playing Stifler's mom in American Pie: Wie ein Heisser Apfelkuchen (1999).She was born on August 28, 1961, in Boston, Massachusetts, USA, to Gretchen (Knauff) and Paul Constant Coolidge, a plastics manufacturer. Young Coolidge was dreaming of becoming a singer. She attended Norwell High School and Emerson College in Boston, Massachusetts, and earned her bachelor's degree in theatre in 1985. She moved to New York and joined the Gotham City improv group. Then, she headed to Los Angeles where she became a long-running member of "The Groundlings" comedy troupe. Coolidge made her television debut in a guest role on NBC's Seinfeld (1989), playing a voluptuous masseuse who won't offer her professional services to boyfriend Jerry in a 1993 episode. The following year, she had a regular gig on ABC's short-lived sketch series She TV (1994), then briefly became a cast member and writer on another short-lived sketch comedy series, Fox's Saturday Night Special (1996) produced by Roseanne Barr.Coolidge made her big screen debut as a nurse in Not of This Earth (1995), then in the courtroom comedy Noch dümmer (1997). Then, she appeared in small roles in several more feature films, and also continued her television work. Coolidge had her breakthrough role in American Pie: Wie ein Heisser Apfelkuchen (1999), as a boozed-up and sultry mom who seduces her son's classmate with the comment that she liked her scotch and men the same way: aged 18 years. She recreated the character in the sequel American Pie 2 (2001). Then, she reprized her role as "Paulette" opposite Reese Witherspoon in the "Legally Blonde" franchise. Although, she lost the part of "Lynette Scavo" on Desperate Housewives (2004) to Felicity Huffman, Coolidge graced several TV comedies as well, with major guest appearances on Frasier (1993) and Sex and the City (1998). Then, she landed a recurring role in the ABC sitcom Joey (2004), as "Bobbie Morgenstern", Joey's agent, appearing in 37 episodes over two seasons.Eventually, Coolidge emerged as a versatile character actress with her no-holds-barred approach to comedy and her vanity-free comfort with playing uninhibited, unappealing characters, and delivering lines with sexual innuendo. Her talent shines in a range of characters, from a gold-digging dog owner in Best in Show (2000), to a scheming wife of an elderly mogul in Einmal Himmel und zurück (2001), to an opportunistic mother in American Dreamz - Alles nur Show (2006). Coolidge's gift for altering her appearance and manner, as well as her mastery of timing, shines in her perfectly hideous performance as "Fiona", a wicked stepmother in Cinderella Story (2004) opposite Hilary Duff, for which Coolidge won a 2005 Teen Choice Award. Her lasting collaboration with director Christopher Guest continues in Es lebe Hollywood (2006).She has been sharing her time between her two homes, one is in Hollywood, California, and one in New Orleans, where she bought a historic mansion before the Hurricane Katrina hit the city, and then became involved in its restoration. - IMDb Mini Biography By: Steve Shelokhonov

Amazon Video has the most number of Jennifer Coolidge’s flixes, followed by Google Play Movies compared to other streaming platforms. See the full graph below.

On average the IMDB score of the movies that Jennifer Coolidge has worked on is 5.9.

In this wicked animated comedy, Mel Wax (Michael McKean) is the head of a dysfunctional Hollywood indie movie studio, Hopeless Pictures, so named after his deceased parents, Hope and Les. ...

A colorful array of characters compete at a national dog show.

A formerly flamboyant hairdresser takes a long walk across a small town to style a dead woman's hair.

Four teenage boys enter a pact to lose their virginity by prom night.

A doctor devotes his life's work to finding a cure for breast cancer.

Two young women waitressing at a greasy spoon diner strike up an unlikely friendship in the hopes of launching a successful business - if only they can raise the cash.

Obsessed with Stolz und Vorurteil (1995), a woman travels to a Jane Austen theme park in search for her perfect gentleman.