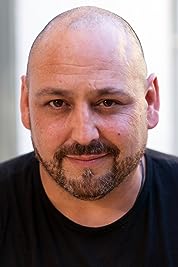 JB was born in Paris, France to an English mother and a French father. He moved with his mother to Yorkshire, England at the age of four, where he was raised and attended school, eventually graduating from The Royal Academy of Dramatic Art (RADA) in 1990.He worked extensively in theater in Britain for over 15 years, including a three-year stint at London's Royal National Theater. His theater work encompassed everything from avant-garde physical theater companies to world tours of Shakespeare plays and classical Greek theater.His film career was essentially launched by his highly acclaimed role as Luigi Vampa in 2002's The Count of Monte Cristo, and following that success, he moved to Los Angeles where he now lives. Film and TV roles soon followed and he has worked on well over 30 TV shows in the US, including Breaking Bad, Better Call Saul, Barry, Shameless, NCIS: LA, Burn Notice, The Unit, Prison Break, CSI: NY, Nikita, NYPD Blue and others, and many films, including his recent role as Bashkim in 2017's War Dogs.JB is also a highly accomplished voice actor and director with projects in film, animation, video games, anime, and commercials. His animation work includes All Hail King Julien, Dragons: Race To The Edge, Scooby Doo, Trip Tank, Turbo Fast, Pickle and Peanut, Regular Show, Penn Zero, The Avengers: Earth's Mightiest Heroes, Guardians of the Galaxy, and Avengers Assemble. He has over 170 video game credits, totaling over 400 characters, including Rost in Horizon Zero Dawn, The Admin in Minecraft Story Mode, Bane in Telltale Batman, Arkham Origins and others, many projects for Blizzard Entertainment and the Uncharted franchise. He has been the voice director on various video games: Fortnite, Middle earth: Shadow of Mordor and Shadow of War, Lego Batman 3, Lego Dimensions, XCOM 2, Mafia III, Overwatch, World of Warcraft, World of Warcraft: Legion, Hearthstone, Diablo III and Heroes of the Storm. - IMDb Mini Biography By: The Coronel Group

Amazon Video has the most number of JB Blanc’s flixes, followed by Vudu compared to other streaming platforms. See the full graph below.

On average the IMDB score of the movies that JB Blanc has worked on is 6.7.

The vampire Alucard, his master Sir Integra Fairbrook Wingates Hellsing, and his newly sired ward Seras Victoria, try to protect England from a war-crazed SS-Major who seeks to start an eternal war with his vampire army.

Action,Adventure,Drama
The Count of Monte Cristo (2002)

A young man, falsely imprisoned by his jealous "friend", escapes and uses a hidden treasure to exact his revenge.

Nenene, a famous female writer, hires the Paper Sisters, so named due to their ability to manipulate and control paper, as bodyguards.

Julien's been dethroned and his kingdom is in trouble so now he has to fight his former brother Koto and free his subjects to get it back with help from his friends.

Batman, a crime-fighting vigilante of Gotham City, goes up against the underworld.

Three characters of different social classes escape their unfinished painting in search of the Painter, hoping he will complete it.

Black Panther is the ruler and protector of the African nation of Wakanda. Using technology, wits, and extraordinary fighting ability he must protect his nation from an invasion led by Ulysses Klaw, the man who killed his father.

Legendary half-vampire, half-human vampire hunter Blade is tracking Deacon Frost, a very powerful and influential vampire who killed his mother and who heads Existence, a secretive vampire organization that operates in Southeast Asia.