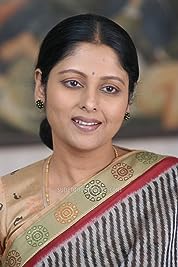 Jayasudha was born on December 17, 1958 in Madras, Tamil Nadu, India. She was initially named Subadra, but her family soon changed it to Sujatha, because they felt that it was a more contemporary name. Her mother had appeared in small film roles as a child but lost interest in films and gave it up. Her father also wasn't involved in films, but his first cousin Vijaya Nirmala was a famous actress and director in South Indian films, as was her husband Krishna Ghattamaneni. When Jayasudha was a child, she would watch her aunt Vijaya Nirmala film scenes and wanted to be like her. Her father disapproved of her dream of becoming an actress. When she was twelve, Vijaya Nirmala offered her a small role in the Telugu film Pandanti Kaapuram (1972), where she and her husband Krishna had leading roles. Jayasudha was excited, but her father said no, and he finally relented when Vijaya Nirmala promised him that she would personally take of her. Jayasudha had a great time acting in the film, but once the film wrapped filming, her father sent her back to school. She fought with him, begging her to continue acting in films, until he finally agreed. But she faced another obstacle, as there was already another actress named Sujatha in films, so the writer-director V.C. Guhanathan gave her the name Jayasudha. Filmmaker A.C. Trilogchander got her started in supporting roles in Tamil films, but it was the demanding filmmaker K. Balachander who cast her in "Arangetram" and "Apporva Rangangal" and pushed her to give good performances. The latter became a hit and she was offered her first heroine role in the Telugu film "Lakshama Rekha" (1975). It led to her second starring film, the title role in Jyothi (1976), which made her a star in Telugu films. She won the Nandi Award as Best Actress, and critics and audiences hailed as a great actress, successor to the previous reigning star Savithri Ganesh. Jayasudha decided to focus completely in Telugu films and signed so many films, that in one single year, she had 24 releases. She would continue to win more Nandi Awards for films like K. Balachander's Idi Katha Kaadu (1979). But Jayasudha was becoming increasingly unhappy with the rigorous shooting schedule, her skin problems, her father's strict managerial skills, and her on-screen pairings with much older leading men. But she refused to give up films, because she enjoyed the acclaim and respect she received from her peers, critics, audiences. She projected a explosive personality on screen, while also adding depth to her performances. Her roles were indicative of the feminist movement of the 1970s, and she was the only known actress who tackled those roles at the time. She and Jayapradha and Sridevi were the reigning heroines during the late 1970s to early 1980s, and she was often paired with them in films. While they played the glamorous roles, she always played the performance-oriented roles and walked away with awards. However, while both Sridevi and Jayaprada became stars in Hindi films as well, Jayasudha's entry into Bollywood failed when her two films Aaina (1977)(directed by K. Balachander) and Shabhash Daddy (1979) for Kishore Kumar were box-office disasters. Her first marriage to a civilian also failed amidst her hectic film schedule. She then fell in love with a Punjabi film producer named Nitin Kapoor. Although both their families initially objected to the pairing because of regional differences, they all attended the wedding in 1985. She has two children with her husband, sons Nihar (born in 1986) and Sreyanth (born in 1990). By this time, Jayasudha wasn't offered heroine roles but was offered supporting roles as mother or sister-in-law to the hero. She turned down those roles, and she collaborated with her husband on some films. However, her growing interest in Christianity and politics started getting her more attention. She converted to Christianity in 2001 but always made a point she has never renounced the Hindu religion. She won an political election, winning a seat in the Secunderabad Assembly in Andhra Pradesh, India. She still continues to act and devote time to her social causes, but her political career has taken up her time and efforts. Her life took a terrible blow when her husband Nitin Kapoor committed suicide due to depression on March 14, 2017, three days before their 32nd wedding anniversary. She looked to her family and her religion for solace and comfort, and she continues to raise awareness for depression. - IMDb Mini Biography By: Ramstep

Amazon Video has the most number of Jayasudha’s flixes, followed by Eros Now compared to other streaming platforms. See the full graph below.

Jayasudha on average has worked on 2 movies per year from 1973 to 2019. See the full graphs of the number of Jayasudha movies released per year from 2003 till 2019.

On average the IMDB score of the movies that Jayasudha has worked on is 6.5.

Ramu is a truck driver. He is a very honest person. But he gets implicated in a smuggling case. He finally proves his innocence to overcome all the problems.

Two guys in dearth need of money kidnap their rich neighbor only to realize that her husband actually wants her dead.

When a Brahmin family finds diminishing monetary opportunities in traditional priestly functions, the daughter must go out and work.

A tale that narrates the healthy relationship between a father and his son.

Balu is son of lovable middle-class couple. Swapna is the daughter of a strict and rich father. Both of them study in a residential college located at a small town of Godavari district. ...