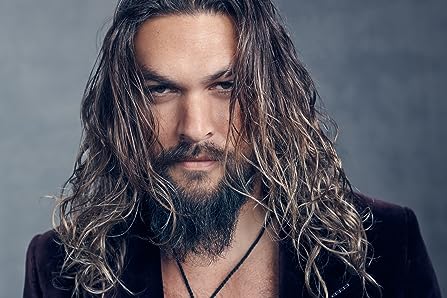 Joseph Jason Namakaeha Momoa was born on August 1, 1979, in Honolulu, Hawaii. He is the son of Coni (Lemke), a photographer, and Joseph Momoa, a painter. His father is of Hawaiian descent and his mother, who is from Iowa, is of mostly German ancestry. Jason was raised in Norwalk, Iowa, by his mother. After high school, he moved to Hawaii, where he landed a lead role, beating out of thousands of hopefuls in the TV series Alerte à Malibu (1989) (known as "Baywatch Hawaii" in its 10th season). When the show ended, he spent the next couple of years traveling around the world. In 2001, he moved to Los Angeles, where he continued to pursue an acting career. In 2004, after the short-lived TV series North Shore: Hôtel du Pacifique (2004), he was cast as the popular character "Ronon Dex" in the TV series Stargate: Atlantis (2004), which achieved a cult-like following. In 2010, he appeared in the Emmy-nominated HBO series Game of Thrones (2011), playing the Dothraki king, Khal Drogo. To illustrate to the producers that he was Khal Drogo, he performed the Haka, a traditional war dance of the Maori of New Zealand. The audition was with the same casting director who was casting the titular role in the reboot of Conan (2011). Four weeks after being cast as the popular Robert E. Howard character, Momoa began shooting in Bulgaria. His approach, like that of the filmmakers, was to pull from the eight decades of comics and stories as well as the Frank Frazetta images rather than the hugely popular 1982 movie. Jason has a production company, Pride of Gypsies, in which he is expanding his career from actor to filmmaker. He has directed a couple of short films and is working on his feature film debut Road to Paloma (2014), which is pulled from a series of stories that he's been developing over the years, which he calls the Brown Bag Diaries: Ridin' the Blinds in B Minor (2010). Jason lives with his wife, actress Lisa Bonet, with whom he has two children, Lola and Nakoa-Wolf. - IMDb Mini Biography By: Keith Simanton

Vudu has the most number of Jason Momoa’s flixes, followed by Amazon Video compared to other streaming platforms. See the full graph below.

On average the IMDB score of the movies that Jason Momoa has worked on is 6.4.

An international team of scientists and military personnel discover a Stargate network in the Pegasus Galaxy and come face-to-face with a new, powerful enemy, The Wraith.

Far in a dystopian future, the human race has lost the sense of sight, and society has had to find new ways to interact, build, hunt, and to survive. All of that is challenged when a set of twins is born with sight.

Revolves around a local cop struggling to keep his family together while simultaneously policing two clashing communities: the small town where he grew up and the neighboring mountains, ...

Follows Declan Harp, a half-Irish/half Cree Native-Canadian outlaw who is campaigning to breach the Hudson's Bay Company's monopoly on the fur trade in Canada.

Arthur Curry (Jason Momoa), the human-born heir to the underwater kingdom of Atlantis, goes on a quest to prevent a war between the worlds of ocean and land.

Fueled by his restored faith in humanity and inspired by Superman's selfless act, Bruce Wayne enlists the help of his new-found ally, Diana Prince, to face an even greater enemy.

Wolf, a Native American on the run after avenging his mother's murder, flees across the desolate American West on his motorcycle, where he'll discover that justice has a cost.