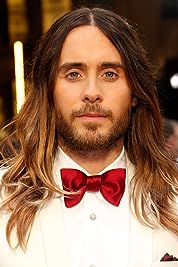 Amazon Video has the most number of Jared Leto’s flixes, followed by Google Play Movies compared to other streaming platforms. See the full graph below.

On average the IMDB score of the movies that Jared Leto has worked on is 6.9.

A 15-year-old girl and her trials and tribulations of being a teenager and dealing with friends, guys, parents, and school.

The drug-induced utopias of four Coney Island people are shattered when their addictions run deep.

In 1985 Dallas, electrician and hustler Ron Woodroof works around the system to help AIDS patients get the medication they need after he is diagnosed with the disease.

A boy stands on a station platform as a train is about to leave. Should he go with his mother or stay with his father? Infinite possibilities arise from this decision. As long as he doesn't choose, anything is possible.

Documentary,Music
A Day in the Life of America (2019)

On July 4th, Jared Leto sent 92 crews to all 50 states to capture A DAY IN THE LIFE OF AMERICA. Shot in a single 24 hour period what he got back was inspiring, provocative, beautiful and ...

An arms dealer confronts the morality of his work as he is being chased by an INTERPOL Agent.