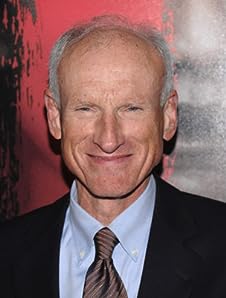 James Robert Rebhorn (September 1, 1948 - March 21, 2014) was an American actor who appeared in over 100 films, television series, and plays. At the time of his death, he had recurring roles in the current series White Collar and Homeland.An early performance was in Butterflies are Free at the Peterborough Players in New Hampshire in 1974. Rebhorn played Peter Latham in Forty Carats at the GasLight Dinner Theatre in Salt Lake City in the 1970s. He was known both for portraying WASP stereotypes, lawyers, politicians, doctors, and military men, as well as portraying individuals with criminal behavior. He has delivered equally notable performances in a variety of other roles, including that of a brutal serial killer on NBC's Law & Order (he would later return to the show in the recurring role of defense attorney Charles Garnett), Ellard Muscatine in Lorenzo's Oil (1992), Fred Waters in Blank Check (1994), Clyde Frost, the father of famed bull rider Lane Frost, in 8 Seconds (1994), Lt. Tyler in White Squall (1996), and a shipping magnate in The Talented Mr. Ripley (1999). One of his best known performances came in the popular 1996 film Independence Day, where he played Secretary of Defense Albert Nimzicki. He acted in Scent of a Woman (1992), and also played an expert witness in My Cousin Vinny (1992). He appeared in Carlito's Way the following year. Rebhorn also played an FBI Agent in the 1994 film Guarding Tess.Rebhorn played several roles on television, including an abusive stepfather, Bradley Raines, on the soap opera Guiding Light from 1983 to 1985, and an abusive father, Henry Lange, on sister soap As The World Turns from 1988 to 1991. An earlier daytime role was as John Brady in Texas from 1981 to 1982. In 1994 he played the role of super villain John McFlemp in the episode "Farewell, My Little Viking" of the Nickelodeon series The Adventures of Pete & Pete. In 1998, he played the District Attorney in the two-part series finale of Seinfeld. He also appeared in a supporting roles in The Game, Meet the Parents, and Regarding Henry. In 2004, he appeared in the TV miniseries Reversible Errors. His role in the short-lived and controversial NBC drama The Book of Daniel cast him as the father of the title character. More recently, he appeared in the Showtime series Homeland as Carrie's bipolar father.Rebhorn also appeared as a judge in Baby Mama. In the 2009 movie The Box, Rebhorn portrayed a NASA scientist. He had recurring roles on the USA series White Collar as Special Agent Reese Hughes, and also as Frank Mathison, the father of the protagonist Carrie Mathison, on Homeland. Rebhorn recently co-starred in the Comedy Central sitcom Big Lake. He played Max Kenton's uncle in the 2011 movie Real Steel. He starred as Oren in the miniseries Coma. Rebhorn starred as Gary Pandamiglio in the 2012 Mike Birbiglia comedy Sleepwalk with Me. He co-starred in the 2013 romantic comedy The Perfect Wedding. His stage career included seven Broadway productions, as well as numerous appearances with New York City's Roundabout Theatre Company. - IMDb Mini Biography By: Movie Guy

Amazon Video has the most number of James Rebhorn’s flixes, followed by Google Play Movies compared to other streaming platforms. See the full graph below.

On average the IMDB score of the movies that James Rebhorn has worked on is 6.5.

A prep school student needing money agrees to "babysit" a blind man, but the job is not at all what he anticipated.

After a wealthy banker is given an opportunity to participate in a mysterious game, his life is turned upside down when he becomes unable to distinguish between the game and reality.

The adventures and love lives of young Texas Rangers Woodrow Call and Augustus McRae leading up to their retirement to the city of Lonesome Dove.

A burgeoning stand-up comedian struggles with the stress of a stalled career, a stale relationship, and the wild spurts of severe sleepwalking he is desperate to ignore.

Looks at the early years of America's most dashing president from his early childhood through his nomination for Congress.

In 1963, during the swirl of glamour and intrigue that turned President John F. Kennedy's Washington into Camelot, a lonely 13-year-old Catholic school boy comes of age.