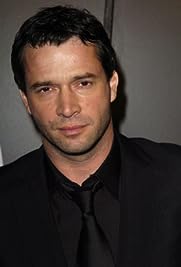 James Brian Mark Purefoy was born and brought up in Taunton, Somerset, England, the son of Shirley (Taylor), who ran an employment agency, and Anthony Chetwynd Purefoy. After leaving school at the age of sixteen, he took a succession of different jobs, including working on a pig farm and as a porter at Yeovil District Hospital, before travelling and working extensively throughout Europe. At eighteen, James returned to college to take his A-Levels, one of which was Drama. It was there that he realised that this was something he felt inspired by and so applied for and was accepted onto the acting course at the Central School of Speech and Drama.Whilst playing the title role in "Henry V" in the first term of his final year at Central, he was seen by a casting director from the RSC and invited to join the company, immediately, in Stratford. Although initially asked only to play "Ferdinand" in Nicholas Hytner's production of "The Tempest", he left the RSC two years later having performed in eight productions and been directed by the likes of Adrian Noble, Roger Michell and Gene Saks playing, amongst other, "Edgar" in "King Lear" and "Malcolm" in "Macbeth". Over the next six years, he divided his time between theatre and television. In the theatre, he worked with Katie Mitchell on "Women of Troy" at the Gate; Matthew Warchus, Ken Stott and Jude Law on "Death of a Salesman" at the West Yorkshire Playhouse; Iain Glen on "Hamlet" at Bristol Old Vic; Bill Alexander in a critically-acclaimed season at Birmingham Rep, playing leading parts in "The Servant", "The Way of the World" and "Macbeth"; and with Simon Callow, Joseph Fiennes, Rupert Graves, and Helen McCrory, on "Les Enfants du Paradis", again for the RSC.As well as appearing in the BBC's landmark period drama, Незнакомка из Уайлдфелл-Холла (1996), he has always chosen to do a wide variety of parts on television, to avoid being typecast. From the psychopathic rapist in BBC1's Calling the Shots (1993) with Lynn Redgrave to the fraudster "Darius Guppy" in LWT's "The Prince"; from the urbane observer "Nick Jenkins" in Channel 4's A Dance to the Music of Time (1997) to the sad stalker in Granada's series, Metropolis (2000), James has always managed to confound people's expectations of him. Over the last few years, he has been busy making feature films, on average at the rate of three a year. Early credits include "Jedd Wainwright" in Последнее лето любви (1995) for "Merchant Ivory", and as the bisexual Irish baker, "Brendan" in Rose Troche's Спальни и прихожие (1998). From the alcoholic roustabout "Tom Bertram" in Мэнсфилд Парк (1999) to the wannabee "Bond" actor "Carl Phipps" in Все возможно, детка (2000); the gambling, womanising "Daniel" in Женские сплетни (1999) with Helena Bonham Carter to the noble, enigmatic "Prince Edward" in Brian Helgeland's История рыцаря (2001).He has continued to surprise those who seek to pigeon-hole him in his film career - always choosing to play parts that juxtapose strongly with the one he has just completed. Last year, he returned to the theatre to play the rake "Ned Loveless" in Trevor Nunn's acclaimed production of "The Relapse" at the National Theatre in London, before embarking on the biggest challenge he has yet faced - playing "George" in the big budget Кольцо дракона (2004), with, among others, Michael Clarke Duncan, Val Kilmer, Piper Perabo and Patrick Swayze. This movie will be released in the summer of 2003. He lives alone in London. - IMDb Mini Biography By: Anonymous

Amazon Video has the most number of James Purefoy’s flixes, followed by Vudu compared to other streaming platforms. See the full graph below.

On average the IMDB score of the movies that James Purefoy has worked on is 6.6.

A down-to-earth account of the lives of both illustrious and ordinary Romans set in the last days of the Roman Republic.

Set in a future where consciousness is digitized and stored, a prisoner returns to life in a new body and must solve a mind-bending murder to win his freedom.

Set in the late 1980's Hap and Leonard is a darkly comic swamp noir of two best friends, one femme fatale, a crew of washed up revolutionaries, a pair of murderous psycho killers, some lost loot, and the fuzz.

Anthony Powell's twelve volume novel sequence "A Dance to the Music of Time" has been dramatized for television.

A brilliant and charismatic, yet psychotic serial killer communicates with other active serial killers and activates a cult of believers following his every command.

A defense barrister is faced with the proposition: what can you do when you have defended the indefensible?

Ten fisherman from Cornwall are signed by Universal Records and achieve a top ten hit with their debut album of Sea Shanties.