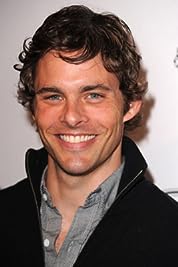 Amazon Video has the most number of James Marsden’s flixes, followed by Google Play Movies compared to other streaming platforms. See the full graph below.

On average the IMDB score of the movies that James Marsden has worked on is 6.1.

Set at the intersection of the near future and the reimagined past, explore a world in which every human appetite can be indulged without consequence.

A series about a powerful friendship that blossoms between a tightly wound widow and a free spirit with a shocking secret.

Animation,Drama,Family
The Tale of The Princess Kaguya (2013)

Found inside a shining stalk of bamboo by an old bamboo cutter and his wife, a tiny girl grows rapidly into an exquisite young lady. The mysterious young princess enthralls all who encounter her, but ultimately she must confront her fate, the punishment for her crime.

A young maiden in a land called Andalasia, who is prepared to be wed, is sent away to New York City by an evil Queen, where she falls in love with a lawyer.

Spanning twenty-four hours, Heights follows five New Yorkers challenged to choose their destiny before the sun comes up the next day.

A pair of former high school sweethearts reunite after many years when they return to visit their small hometown.