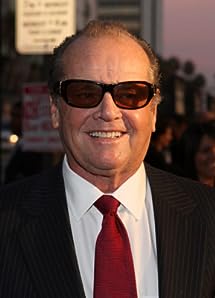 Jack Nicholson, an American actor, producer, director and screenwriter, is a three-time Academy Award winner and twelve-time nominee. Nicholson is also notable for being one of two actors - the other being Michael Caine - who have received an Oscar nomination in every decade from the 1960s through the early 2000s.Nicholson was born on April 22, 1937, in Neptune, New Jersey. He was raised believing that his grandmother was his mother, and that his mother, June Frances Nicholson, a showgirl, was his older sister. He discovered the truth in 1975 from a Time magazine journalist who was researching a profile on him. His real father is believed to have been either Donald Furcillo, an Italian American showman, or Eddie King (Edgar Kirschfeld), born in Latvia and also in show business. Jack's mother's ancestry was Irish, and smaller amounts of English, German, Scottish, and Welsh.Nicholson made his film debut in a B-movie titled The Cry Baby Killer (1958). His rise in Hollywood was far from meteoric, and for years, he sustained his career with guest spots in television series and a number of Roger Corman films, including Rémségek kicsiny boltja (1960).Nicholson's first turn in the director's chair was for Hajts, mondta (1971). Before that, he wrote the screenplay for Az utazás (1967), and co-wrote Head (1968), a vehicle for The Monkees. His big break came with Szelíd motorosok (1969) and his portrayal of liquor-soaked attorney George Hanson, which earned Nicholson his first Oscar nomination. Nicholson's film career took off in the 1970s with a definitive performance in Öt könnyű darab (1970). Nicholson's other notable work during this period includes leading roles in Roman Polanski's noir masterpiece Kínai negyed (1974) and Száll a kakukk fészkére (1975), for which he won his first Best Actor Oscar.The 1980s kicked off with another career-defining role for Nicholson as Jack Torrance in Stanley Kubrick's adaptation of Stephen King's novel Ragyogás (1980). A string of well-received films followed, including Becéző szavak (1983), which earned Nicholson his second Oscar; A Prizzik becsülete (1985), and Az eastwicki boszorkányok (1987). He portrayed another renowned villain, The Joker, in Tim Burton's Batman - A denevérember (1989). In the 1990s, he starred in such varied films as Egy becsületbeli ügy (1992), for which he received another Oscar nomination, and a dual role in Támad a Mars! (1996).Although a glimpse at the darker side of Nicholson's acting range reappeared in A tégla (2006), the actor's most recent roles highlight the physical and emotional complications one faces late in life. The most notable of these is the unapologetically misanthropic Melvin Udall in Lesz ez még így se! (1997), for which he won his third Oscar. Shades of this persona are apparent in Schmidt története (2002), Minden végzet nehéz (2003), and A bakancslista (2007). In addition to his Academy Awards and Oscar nominations, Nicholson has seven Golden Globe Awards, and received a Kennedy Center Honor in 2001. He also became one of the youngest actors to receive the American Film Institute's Life Achievement award in 1994.Nicholson has five children: Eldest daughter Jennifer Nicholson (b. 1963), from his marriage to Sandra Knight, which ended in 1968; Caleb James Goddard (b. 1970) with Susan Anspach; Honey Hollman (b. 1981) with Danish supermodel, Winnie Hollman; and Lorraine Nicholson (b. 1990) and Ray Nicholson (b. 1992) with Rebecca Broussard. Nicholson's longest relationship was the 17 years he spent with actress Anjelica Huston; this ended when Broussard become pregnant with his child. - IMDb Mini Biography By: Pedro Borges

Amazon Video has the most number of Jack Nicholson’s flixes, followed by Google Play Movies compared to other streaming platforms. See the full graph below.

On average the IMDB score of the movies that Jack Nicholson has worked on is 6.8.

A criminal pleads insanity and is admitted to a mental institution, where he rebels against the oppressive nurse and rallies up the scared patients.

A family heads to an isolated hotel for the winter where a sinister presence influences the father into violence, while his psychic son sees horrific forebodings from both past and future.

A private detective hired to expose an adulterer finds himself caught up in a web of deceit, corruption, and murder.

A single mother and waitress, a misanthropic author, and a gay artist form an unlikely friendship after the artist is assaulted in a robbery.

The Rolling Stones perform an acoustic, "stripped down" show, mixing their popular and more obscure material.

A frustrated war correspondent, unable to find the war he's been asked to cover, takes the risky path of coopting the identity of a dead arms dealer acquaintance.