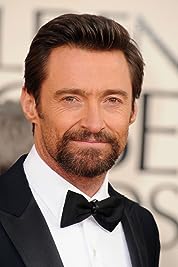 Hugh Michael Jackman is an Australian actor, singer, multi-instrumentalist, dancer and producer. Jackman has won international recognition for his roles in major films, notably as superhero, period, and romance characters. He is best known for his long-running role as Wolverine in the X-Men film series, as well as for his lead roles in the romantic-comedy fantasy Kate & Leopold (2001), the action-horror film Van Helsing (2004), the drama The Prestige and The Fountain (2006), the epic historical romantic drama Australia (2008), the film version of Les Misérables (2012), and the thriller Prisoners (2013). His work in Les Misérables earned him his first Academy Award nomination for Best Actor and his first Golden Globe Award for Best Actor - Motion Picture Musical or Comedy in 2013. In Broadway theatre, Jackman won a Tony Award for his role in The Boy from Oz. A four-time host of the Tony Awards themselves, he won an Emmy Award for one of these appearances. Jackman also hosted the 81st Academy Awards on 22 February 2009.Jackman was born in Sydney, New South Wales, to Grace McNeil (Greenwood) and Christopher John Jackman, an accountant. He is the youngest of five children. His parents, both English, moved to Australia shortly before his birth. He also has Greek (from a great-grandfather) and Scottish (from a grandmother) ancestry.Jackman has a communications degree with a journalism major from the University of Technology Sydney. After graduating, he pursued drama at the Western Australian Academy of Performing Arts, immediately after which he was offered a starring role in the ABC-TV prison drama Correlli (1995), opposite his future wife Deborra-Lee Furness. Several TV guest roles followed, as an actor and variety compere. An accomplished singer, Jackman has starred as Gaston in the Australian production of "Beauty and the Beast." He appeared as Joe Gillis in the Australian production of "Sunset Boulevard." In 1998, he was cast as Curly in the Royal National Theatre's production of Trevor Nunn's Oklahoma. Jackman has made two feature films, the second of which, Erskineville Kings (1999), garnered him an Australian Film Institute nomination for Best Actor in 1999. Recently, he won the part of Logan/Wolverine in the Bryan Singer- directed comic-book movie X-Men (2000). In his spare time, Jackman plays piano, golf, and guitar, and likes to windsurf. - IMDb Mini Biography By: Anonymous

Amazon Video has the most number of Hugh Jackman’s flixes, followed by YouTube compared to other streaming platforms. See the full graph below.

On average the IMDB score of the movies that Hugh Jackman has worked on is 6.9.

In a future where mutants are nearly extinct, an elderly and weary Logan leads a quiet life. But when Laura, a mutant child pursued by scientists, comes to him for help, he must get her to safety.

When Keller Dover's daughter and her friend go missing, he takes matters into his own hands as the police pursue multiple leads and the pressure mounts.

Action,Adventure,Sci-Fi
X-Men: Days of Future Past (2014)

The X-Men send Wolverine to the past in a desperate effort to change history and prevent an event that results in doom for both humans and mutants.

Cowboy Curly McClain tries to win the heart of a girl in a singing and dancing extravaganza.

Celebrates the birth of show business and tells of a visionary who rose from nothing to create a spectacle that became a worldwide sensation.

In 19th-century France, Jean Valjean, who for decades has been hunted by the ruthless policeman Javert after breaking parole, agrees to care for a factory worker's daughter. The decision changes their lives forever.

Damon Gameau embarks on an experiment to document the effects of a high sugar diet on a healthy body.