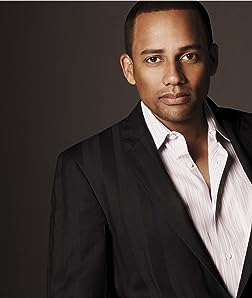 Hill Harper, an accomplished film, television and stage actor, stars in the hit CBS drama series, CSI: NY (2004). He portrays "Dr. Sheldon Hawkes", a reclusive coroner who walked away from a promising surgical career after the traumatic loss of two patients. This February, he will star in the HBO movie, Lackawanna Blues (2005), which is based on the critically-acclaimed stage play by Ruben Santiago-Hudson. Recently, "People" magazine selected Harper as one of their "Sexiest Men Alive" (2004).Prior to CSI: NY (2004), Harper co-starred as an ambitious undercover FBI operative on the CBS series, The Handler (2003), alongside Emmy Award nominee Joe Pantoliano. The role earned him a 2004 Golden Satellite Award nomination for Outstanding Supporting Actor in a Drama Series. He has also been recognized by the NAACP Image Awards with a nomination as Best Supporting Actor for his performance in the CBS series, City of Angels (2000).Harper received critical acclaim for his performance in the independent film, The Visit (2000), directed by Jordan Walker-Pearlman, which tells the story of two brothers who are forced to come together when the younger sibling (played by Harper), who is HIV-positive, is sentenced to death row for a crime he seemingly did not commit. His performance, which Daily Variety called "riveting", earned him a Best Actor nomination by the Independent Spirit Awards. He re-teams with Walker-Pearlman in the upcoming independent feature, Constellation (2005), which chronicles the lives and loves of a family in the Deep South.His recent film roles include the lead in the independent film, Love, Sex and Eating the Bones (2003), which was accepted into the Toronto International, Palm Springs, and Pan African film festivals. This intriguing film won "Best Canadian First Feature Film" in the 2003 Toronto International Film Festival and both "Best Feature" and "Audience Favorite" in the 2004 Pan African Film Festival. He has also completed work on the independent film, America Brown (2004), which was accepted into the 2004 Tribeca Film Festival. Harper's other screen credits include: Loving Jezebel (1999)_, The Nephew (1998) (with Pierce Brosnan), The Skulls (2000) (with Joshua Jackson), In Too Deep (1999) (with Omar Epps, LL Cool J and Nia Long), Beloved (1998), Hav Plenty (1997), He Got Game (1998) (with Denzel Washington), and Get on the Bus (1996). Other films include Zooman (1995) (with Louis Gossett Jr., Charles S. Dutton and CCH Pounder), "Full Court Press" (with Ellen Burstyn and Taye Diggs) and One Red Rose (1995), which he also co-wrote, for Showtime.As a television actor, Harper has had numerous guest-starring roles. He recently appeared on recurring episodes of Showtime's Soul Food (2000) and guest-starred on HBO's The Sopranos (1999). He also starred in the CBS mini-series, Mama Flora's Family (1998) and the UPN Network comedy/drama, Live Shot (1995). Other guest appearances include: ER (1994), NYPD Blue (1993), Murder One (1995), The Fresh Prince of Bel-Air (1990) and Married with Children (1987).Harper's stage credits include appearances in off-Broadway productions of "Your Handsome Captain", "Freeman", and David Mamet's "American Buffalo". He completed a starring run of Jessica Hagedorn's "Dogeaters" at New York's Joseph Papp Public Theatre.Harper graduated magna cum laude from Brown University with a Bachelor of Arts degree and graduated with a J.D. (cum laude) from Harvard Law School, as well as with a Masters in Public Administration from the Kennedy School of Government. He is a full-time member of Boston's Black Folk's Theater Company, one of the nation's oldest and most respected African-American traveling theater troupes. Harper's Bazaar wrote, "You might expect Hill Harper to be the next actor vying for the presidency... but he has other things on his agenda". - IMDb Mini Biography By: Lisa Sorensen

Amazon Video has the most number of Hill Harper’s flixes, followed by Vudu compared to other streaming platforms. See the full graph below.

On average the IMDB score of the movies that Hill Harper has worked on is 6.5.

Documentary
The Prison Within (2020)

Prisoners incarcerated for murder inside San Quentin Prison transcend the punitive prison system to unearth the root cause of their violence by working with victims of violent crime.

Shaun Murphy, a young surgeon with autism and Savant syndrome, is recruited into the surgical unit of a prestigious hospital.

An average twenty-eight-year-old man who gains the ability to use the full extent of his brain's capabilities is hired by the F.B.I. as a consultant.

Mama Flora reflects on her life while trying to help her grand-daughter get her life right and be a better mother for her son. All while bringing the family she has left back together. Movies takes place from the 1910s to the 1970s.

After quitting her stable but soul-crushing job, Leigh passes her days in an apathetic fog. Bored and feeling a vague sense of guilt, she volunteers at a local soup kitchen where she begins...

Fresh out of the farm, Annie Walker must adapt to the challenging life of a CIA operative under the guidance of her handler, Auggie. But soon she realizes her recruit might have to do with her last boyfriend rather than her talent.

Crime,Documentary,Mystery
How It Really Happened with Hill Harper (2016)

HLN dives into the deepest, darkest, gruesome mysteries and murders of the past. What really happened and how did it all play out?

A father struggles to protect his daughter from the reality of her mother's drug addiction.