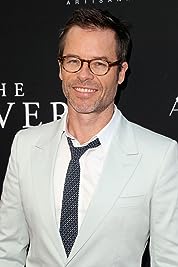 Guy Edward Pearce was born 5 October, 1967 in Cambridgeshire, England, UK to Margaret Anne and Stuart Graham Pearce. His father was born in Auckland, New Zealand, to English and Scottish parents, while Guy's mother is English. Pearce and his family initially traveled to Australia for two years, after his father was offered the position of Chief test pilot for the Australian Government. Guy was just 3-years-old. After deciding to stay in Australia and settling in the Victorian city of Geelong, Guy's father was killed 5 years later in an aircraft test flight, leaving Guy's mother, a schoolteacher, to care for him and his older sister, Tracy.Having little interest in subjects at school like math or science, Guy favored art, drama and music. He joined local theatre groups at a young age and appeared in such productions as "The King and I", "Fiddler on the Roof" and "The Wizard of Oz". In 1985, just two days after his final high school exam, Guy started a four-year stint as "Mike Young" on the popular Aussie soap Les voisins (1985). At age 20, Guy appeared in his first film, Heaven Tonight (1990), then, after a string of appearances in film, television and on the stage, he won the role of an outrageous drag queen in Priscilla, folle du désert (1994).Most recently, he has amazed film critics and audiences, alike, with his magnificent performances in L.A. Confidential (1997), Memento (2000), The Proposition (2005), Portrait d'une muse (2006), Démineurs (2008), Le discours d'un roi (2010) and the HBO mini-series, Mildred Pierce (2011). Next to acting, Guy has had a life-long passion for music and songwriting.Guy likes to keep his private life very private. He lives in Melbourne, Australia, which is also where he married his childhood sweetheart, Kate Mestitz in March 1997. - IMDb Mini Biography By: Tim Neal

Amazon Video has the most number of Guy Pearce’s flixes, followed by Vudu compared to other streaming platforms. See the full graph below.

On average the IMDB score of the movies that Guy Pearce has worked on is 6.5.

A man with short-term memory loss attempts to track down his wife's murderer.

As corruption grows in 1950s Los Angeles, three policemen - one strait-laced, one brutal, and one sleazy - investigate a series of murders with their own brand of justice.

Jack is engaged to find a missing person, only to be later framed for his murder. Jack is quickly caught up in a complex web of powerful vested interests that stretches from his home town of Fitzroy to a remote village in the Philippines.

Action,Adventure,Drama
The Count of Monte Cristo (2002)

A young man, falsely imprisoned by his jealous "friend", escapes and uses a hidden treasure to exact his revenge.

Divorced single mom Mildred Pierce decides to open a restaurant business, which tears at the already-strained relationship with her ambitious elder daughter, Veda.

During the Iraq War, a Sergeant recently assigned to an army bomb squad is put at odds with his squad mates due to his maverick way of handling his work.

Comedy,Music
The Adventures of Priscilla, Queen of the Desert (1994)

Two drag performers and a transgender woman travel across the desert to perform their unique style of cabaret.

A seventeen-year-old navigates his survival amongst an explosive criminal family and the detective who thinks he can save him.