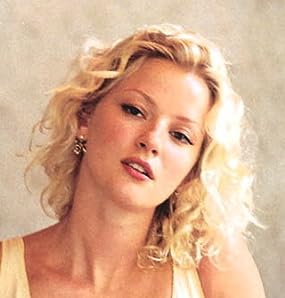 Gretchen Mol was born November 8, 1972, in Deep River, Connecticut, the daughter of a school principal and his artist wife. Deep River is a small community located on the Chester Bowles Highway (Rt. 9), nine miles northwest of Old Saybrook (home of the legendary Katharine Hepburn), within commuting distance of New York City. The young Gretchen was bit by the acting bug and participated in high school theatrics, then moved to the Big Apple as a teenager to study acting and musical theater at the American Musical and Dramatic Academy and at the William Esper Studio.Although only 5'6" tall--too short for a traditional modeling career--her unique beauty brought her modeling jobs as she pursued her dream of becoming a professional actress. She began appearing in magazines in 1994, meanwhile working at such time-honored Manhattan jobs as restaurant hat-check girl. It was while working that gig she was discovered by a talent agent. The agent landed her her first acting job, a TV commercial for Coca-Cola. She continued to hone her acting skills in summer stock, appearing in such productions as "Bus Stop", "No Exit" and "Godspell".The 23-year-old Gretchen made her film debut in Spike Lee's Girl 6 (1996), a small role that came to her, as luck would have it, after she had gone for an audition for the soap opera Haine et passion (1952). Her career began to take off, and she appeared in small parts, mostly "girlfriend" roles, in such films as Les joueurs (1998) starring 'Matt Damon' (qav) and in Woody Allen's Celebrity (1998), opposite Kenneth Branagh and Leonardo DiCaprio.Gretchen was touted as the "Next Big Thing" after appearing on the cover of the September 1998 issue of "Vanity Fair". Her most memorable role up to that time was as a mobster's moll in the minor cult classic Donnie Brasco (1997), which was mostly remembered for cinematic turns by Al Pacino, Johnny Depp and Anne Heche. Nonetheless, her beauty and presence led "Vanity Fair" to hype the beautiful blonde, heralding the arrival of a major new star. She seemed poised to move up to featured roles. but the announcement turned out to be premature. Brunette Angelina Jolie proved to be Hollywood's Next "It" girl.During the seven years that followed the "Vanity Fair" cover story, Mol continued to appear in films and on the stage, including the part of Jennie in the London and New York productions of Neil LaBute's "The Shape of Things" in 2001 (she also appeared in the film version, Fausses apparences (2003)). The good reviews she got proved that she was not just another pretty face. In 2004 she displayed her singing and dancing chops by playing Roxie Hart in the Broadway production of "Chicago."She worked steadily, appearing in another small role in Woody Allen's Accords & désaccords (1999), and eventually won the lead in David E. Kelley TV series Girls Club (2002). The series bombed, however, and was canceled after only two episodes. Nevertheless, the intervening period allowed her to develop as an actress. In 2004 the blonde beauty finally had the role that proved to be her acting breakthrough: brunette 1950s "stag queen" Bettie Page in The Notorious Bettie Page (2005). Many brunettes have gone blonde, but Mol--the blonde who went brunette--rocked the screen with her presence. Her embodiment of the legendary Page garnered excellent reviews and propelled the flick into art house hit status.Mol married film director Tod Williams on June 1, 2004, and they became parents a little over three years later, when a son, Ptolemy John Williams, was born on October 10, 2007. - IMDb Mini Biography By: Jon C. Hopwood (qv's & corrections by A. Nonymous)

Amazon Video has the most number of Gretchen Mol’s flixes, followed by Vudu compared to other streaming platforms. See the full graph below.

On average the IMDB score of the movies that Gretchen Mol has worked on is 6.4.

An Atlantic City politician plays both sides of the law by conspiring with gangsters during the Prohibition era.

A present day car accident mysteriously sends a detective back to the 1970s.

A young, reformed gambler must return to playing big stakes poker to help a friend pay off loan sharks, while balancing his relationship with his girlfriend and his commitments to law school.

A computer scientist running a virtual reality simulation of 1937 becomes the primary suspect when his colleague and mentor is murdered.

When Belo Monte dam displaces an indigenous girl, she must rely on a white man to save her people - although he is the key to their destruction.

Drama,Family,Romance
The Valley of Light (2006)

Returning from the War, Noah Lark discovers his family is gone. With a passion for fishing, Noah travels to a new town in search of a legendary great bass that has yet to be caught. On his ...

Comedy,Drama,Romance
The Shape of Things (2003)

A quiet, unassuming man begins to change in a major way as a result of meeting a new, art-student girlfriend, and his friends are unsettled by the transformation.