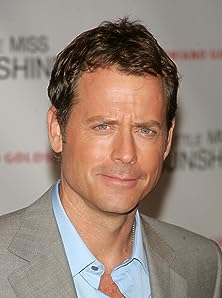 Greg Kinnear was born on June 17, 1963, in Logansport, Indiana, USA to Edward Kinnear, a career diplomat with the US State Department, and Suzanne (nee Buck) Kinnear, a homemaker. He has two brothers -- James, vice president-investments at Wachovia Securities in Arizona who was born in 1957, and Steve, a business manager with the Billy Graham Training Center in North Carolina who was born in 1959. His family moved often, including Lebanon and Greece. While a student in Athens, Greg first ventured into the role of talk show host with his radio show "School Daze With Greg Kinnear".Returning to college in the States, he attended the University of Arizona in Tucson, graduating in 1985 with a degree in broadcast journalism. He headed out to Los Angeles, landing his first job as a marketing assistant with Empire Entertainment. He auditioned to be an MTV VJ, but was not selected and became an on-location reporter for the channel. He had bit parts on La loi de Los Angeles (1986) and Corky, un adolescent pas comme les autres (1989). He would later become the creator, co-executive producer, and host of Best of the Worst (1991) (1990-91). His breakthrough was as first host of Talk Soup (1991) (1994), when he left the show for the NBC late-night talk show, Later with Greg Kinnear (1994).In 1994, Kinnear had his first big screen role, as a talk show host in the Damon Wayans comedy Blankman (1994). In 1995 he won the role of David Larrabee in Sydney Pollack's remake of Billy Wilder's 1954 classic Sabrina (1995). Next was the lead in the 1996 comedy Escroc malgré lui (1996). In 1997, he was cast in James L. Brooks's blockbuster comedy-drama Pour le pire et pour le meilleur (1997), receiving an Oscar nomination as best supporting actor. In his next film, the romantic comedy A Smile Like Yours (1997), he starred opposite Lauren Holly as part of a couple trying to have a baby. The film met with lukewarm reviews and a low box office.His next film, Vous avez un mess@ge (1998), struck gold. He played Meg Ryan's significant other, a newspaper columnist. Next he played Captain Amazing in Mystery Men (1999). His more recent films have Nurse Betty (2000), Loser (2000), and Attraction animale (2001). - IMDb Mini Biography By: TrendEkiD@aol.com

Amazon Video has the most number of Greg Kinnear’s flixes, followed by Vudu compared to other streaming platforms. See the full graph below.

On average the IMDB score of the movies that Greg Kinnear has worked on is 6.4.

A single mother and waitress, a misanthropic author, and a gay artist form an unlikely friendship after the artist is assaulted in a robbery.

The triumphs and tragedies of the most popular political family in American history.

A football player's dreams to play in the NFL are halted when he is wrongly convicted and sent to prison. Years later, he fights to clear his name within an unjust system.

A sci-fi anthology series with stand-alone episodes based on the works of Philip K. Dick.

An acclaimed writer, his ex-wife, and their teenaged children come to terms with the complexities of love in all its forms over the course of one tumultuous year.

The story of the first major battle of the American phase of the Vietnam War, and the soldiers on both sides that fought it, while their wives wait nervously and anxiously at home for the good news or the bad news.

Robert Kearns takes on the Detroit automakers who he claims stole his idea for the intermittent windshield wiper.