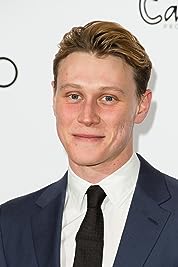 George MacKay was born 13 March, 1992 in Hammersmith, London, England, to Kim Baker, a British costume designer, and Paul Christopher MacKay, an Australian stage/lighting manager, from Adelaide. One of his grandmothers is from Cork, Ireland.At the age of ten, George was scouted to audition for a role in the family feature, Peter Pan (2003). He quickly landed the part of Curly, one of the Lost Boys, and went on to have several minor roles on TV, including an episode of Rose and Maloney (2002) and Footprints in the Snow (2005). At thirteen, George landed the part of Riccio in the film adaptation of Cornelia Funke's best-selling children's novel, Herr der Diebe (2006), starring Aaron Taylor-Johnson, and was also cast in lead role for the BBC adaptation of Terry Pratchett's Johnny and the Bomb (2006).George worked with Tim Roth, Chiwetel Ejiofor and Sophie Okonedo for the HBO Movie Tsunami - Die Killerwelle (2006) and later took a part in the Dikensian drama, The Old Curiosity Shop (2007). Soon after, George co-starred with Daniel Craig and Liev Schreiber on Unbeugsam (2008). In 2009, George took on the role of Harry, in The Boys Are Back - Zurück ins Leben (2009) alongside Clive Owen, for which he received 2 award nominations. His career took another step forward with Summer Musical (2011).Since, George has featured in several shorts which have been popular on the festival circuit and played the part of Tommo Peaceful with counterpart Jack O'Connell in the adaptation of Michael Morpurgo's Private Peaceful - Mein Bruder Charlie (2012).2013 was George's breakthrough year, and was recognized for his parts as Aaron in For Those in Peril (2013), Davy in the musical Make My Heart Fly - Verliebt in Edinburgh (2013), Jake Whittam in Breakfast with Jonny Wilkinson (2013) and the dark horse Eddie in How I Live Now (2013). George received several nominations and for such features and later bought home a total of 5 awards.George had a stint in the West End in 2014 in The Cement Garden. He portrayed Joe in the well-received Pride (2014) and Duane Hopkins' Bypass (2014) premiered at the BFI London Film Festival in October. Both Captain Fantastic and Sadie Jones' The Outcast (2015) are in post-production and George will be returning to theatre for Eugene O'Neill's 'Ah,Wilderness!' this April.In 2016, George starred in the film Captain Fantastic: Einmal Wildnis und zurück (2016), opposite Viggo Mortensen, and the mini-series 11.22.63 - Der Anschlag (2016), with James Franco and Sarah Gadon. He rounded out the decade playing the starring role in Sam Mendes' 1917 (2019), a box office hit and highly critically-acclaimed drama set during World War I and shot to simulate a single take in real time. - IMDb Mini Biography By: GeorgeMacKayConnection

Amazon Video has the most number of George MacKay’s flixes, followed by Vudu compared to other streaming platforms. See the full graph below.

On average the IMDB score of the movies that George MacKay has worked on is 6.7.

April 6th, 1917. As a regiment assembles to wage war deep in enemy territory, two soldiers are assigned to race against time and deliver a message that will stop 1,600 men from walking straight into a deadly trap.

Biography,Drama,History
The Best of Men (2012)

Towards the end of the Second World War, Dr Ludwig Guttmann, a brisk refugee from Nazi Germany, arrives at Stoke Mandeville hospital in Buckinghamshire and is appalled to find the partially...

In the forests of the Pacific Northwest, a father devoted to raising his six kids with a rigorous physical and intellectual education is forced to leave his paradise and enter the world, challenging his idea of what it means to be a parent.

A young boy struggles to fit into the life of a post-war English village after witnessing the death of his mother.

A sports writer becomes a single parent in tragic circumstances.

A young man and his three younger siblings, who have kept secret the death of their beloved mother in order to remain together, are plagued by a sinister presence in the sprawling manor in which they live.

Action,Adventure,Drama
How I Live Now (2013)

An American girl, sent to the English countryside to stay with relatives, finds love and purpose while fighting for her survival as war envelops the world around her.