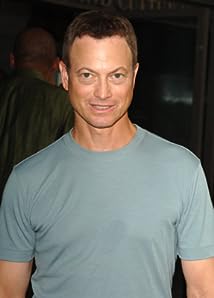 Gary Alan Sinise was born in Blue Island, Illinois, to Mylles S. (Alsip) and Robert L. Sinise, A.C.E., a film editor. He is of Italian (from his paternal grandfather), English, Scottish, Irish, French, German, and Swedish ancestry. His family moved to Highland Park, where he attended high school. He was something of a rebel, playing in bands but paying little attention to school.Gary and some friends tried out for "West Side Story" as a lark, but Gary was hooked on acting for life by closing night. Gary credits his love for theatre to his drama teacher, Barbara Patterson. In 1974, Gary, Terry Kinney, and Jeff Perry founded the Steppenwolf Theatre Company in Chicago. Initially performing in a church basement, the company grew and gained stature in the Chicago area. In addition to acting in many plays, Gary also directed some of Steppenwolf's most notable productions, including Sam Shepard's "True West". The company made its off-Broadway debut with that production, starring Gary and John Malkovich, and its Broadway debut with "The Grapes of Wrath" at the Cort Theatre in 1990. Gary's Hollywood career also started in the director's chair with two episodes of the stylish TV series Crime Story (1986), followed in 1988 by the feature Miles from Home (1988) starring Richard Gere. Gary's first feature film as an actor was the World War II fable A Midnight Clear (1992) in 1992. That year also found Gary combining his acting and directing talents with the critically acclaimed Om mus og menn (1992). His first real notice by the public came in 1994, however. He starred in the blockbuster miniseries The Stand (1994), rapidly followed by his bravura performance as "Lt. Dan" in Forrest Gump (1994). His portrayal of the disabled, emotionally tortured veteran earned Gary numerous awards and an Oscar nomination. Busy 1994 was followed by busy 1995, first reuniting with Tom Hanks in Apollo 13 (1995) and then starring in the HBO film Truman (1995) which earned him the Golden Globe and Screen Actors Guild Awards and an Emmy nomination.Gary is married to Moira Sinise, an actress and original member of the Steppenwolf company. They have three children, Sophie Sinise, McCanna Anthony Sinise and Ella Sinise. - IMDb Mini Biography By: Lynn <lynnishmail-misc@yahoo.com>

Amazon Video has the most number of Gary Sinise’s flixes, followed by Microsoft Store compared to other streaming platforms. See the full graph below.

On average the IMDB score of the movies that Gary Sinise has worked on is 6.9.

Documentary,History
When We Left Earth: The NASA Missions (2008)

Narrated by award-winning actor Gary Sinise, WHEN WE LEFT EARTH is the incredible story of humankind's greatest adventure, as it happened, told by the people who were there. From the early ...

The presidencies of Kennedy and Johnson, the events of Vietnam, Watergate and other historical events unfold through the perspective of an Alabama man with an IQ of 75, whose only desire is to be reunited with his childhood sweetheart.

The documentary film chronicles the experiences of student athletes at West Point and Annapolis as they prepare to serve their country and participate in a rivalry unmatched by any other in...

History
Missions That Changed the War (2010)

Daring WW2 missions that changed the course of the war.

NASA must devise a strategy to return Apollo 13 to Earth safely after the spacecraft undergoes massive internal damage putting the lives of the three astronauts on board in jeopardy.

Follows acclaimed actor Stephen Lang as he tracks the ten year odyssey behind his one-man show about eight medal of honor recipients.

Two drifters, one a gentle but slow giant, try to make money working the fields during the Depression so they can fulfill their dreams.