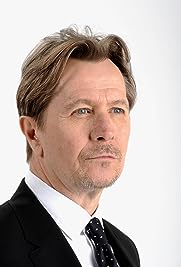 Gary Oldman is a talented English movie star and character actor, renowned for his expressive acting style. One of the most celebrated thespians of his generation, with a diverse career encompassing theatre, film and television, he is known for his roles as Sid Vicious in Sid és Nancy (1986), Drexl in Tiszta románc (1993), George Smiley in Suszter, szabó, baka, kém (2011), and Winston Churchill in A legsötétebb óra (2017), among many others. For much of his career, he was best-known for playing over-the-top antagonists, such as terrorist Egor Korshunov in the 1997 blockbuster Az elnök különgépe (1997), though he has reached a new audience with heroic roles in the Harry Potter and Dark Knight franchises. He is also a filmmaker, musician, and author.Gary Leonard Oldman was born on March 21, 1958 in New Cross, London, England, to Kathleen (Cheriton), a homemaker, and Leonard Bertram Oldman, a welder. He won a scholarship to Britain's Rose Bruford Drama College, in Sidcup, Kent, where he received a B.A. in theatre arts in 1979. He subsequently studied with the Greenwich Young People's Theatre and went on to appear in a number of plays throughout the early '80s, including "The Pope's Wedding," for which he received Time Out's Fringe Award for Best Newcomer of 1985-1986 and the British Theatre Association's Drama Magazine Award as Best Actor for 1985. Before fame, he was employed as a worker in assembly lines, and as a porter in an operating theater. He also got jobs selling shoes and beheading pigs while supporting his early acting career.His film debut was Remembrance (1982), though his most-memorable early role came when he played Sex Pistol Sid Vicious in the biopic Sid és Nancy (1986) picking up the Evening Standard Film Award as Best Newcomer. He then received a Best Actor nomination from BAFTA for his portrayal of '60s playwright Joe Orton in Hegyezd a füled! (1987).In the 1990s, Oldman brought to life a series of iconic real-world and fictional villains including Lee Harvey Oswald in JFK - A nyitott dosszié (1991), the title character in Drakula (1992), Drexl Spivey in Tiszta románc (1993), Stansfield in Léon, a profi (1994), Jean-Baptiste Emanuel Zorg in Az ötödik elem (1997) and Ivan Korshunov in Az elnök különgépe (1997). That decade also saw Oldman portraying Ludwig van Beethoven in biopic Halhatatlan kedves (1994).Oldman played the coveted role of Sirius Black in Harry Potter és az azkabani fogoly (2004), giving him a key part in one of the highest-grossing franchises ever. He reprised that role in Harry Potter és a tűz serlege (2005) and Harry Potter és a Főnix rendje (2007). Oldman also took on the iconic role of Detective James Gordon in writer-director Christopher Nolan's Batman: Kezdődik! (2005), a role he played again in A sötét lovag (2008) and A sötét lovag: Felemelkedés (2012). Prominent film critic Mark Kermode, in reviewing The Dark Knight, wrote, "the best performance in the film, by a mile, is Gary Oldman's ... it would be lovely to see him get a[n Academy Award] nomination because actually, he's the guy who gets kind of overlooked in all of this."Oldman co-starred with Jim Carrey in the 2009 version of A Christmas Carol in which Oldman played three roles. He had a starring role in David Goyer's supernatural thriller The Unborn, released in 2009. In 2010, Oldman co-starred with Denzel Washington in The Book of Eli. He also played a lead role in Catherine Hardwicke's Red Riding Hood. Oldman voiced the role of villain Lord Shen and was nominated for an Annie Award for his performance in Kung Fu Panda 2.In 2011, Oldman portrayed master spy George Smiley in the adaptation of John le Carré's Suszter, szabó, baka, kém (2011), and the role scored Oldman his first Academy Award nomination. In 2014, he played one of the lead humans in the science fiction action film A majmok bolygója: Forradalom (2014). Also in 2014, Oldman starred alongside Joel Kinnaman, Abbie Cornish, Michael Keaton, and Samuel L. Jackson in the remake of Robotzsaru (2014), as Norton, the scientist who creates RoboCop. Also that year, Oldman starred in Dawn of the Planet of the Apes as one of the leads alongside Jason Clarke and Keri Russell.Aside from acting, Oldman tried his hand at writing and directing for Éhkoppon (1997). The movie opened the Cannes Film Festival in 1997, and won Kathy Burke a Best Actress prize at the festival.Oldman has three children, Alfie, with first wife, actress Lesley Manville, and Gulliver and Charlie with his third wife, Donya Fiorentino. In 2017, he married writer and art curator Gisele Schmidt.In 2018 he won an Oscar for best actor for his work on A legsötétebb óra (2017). - IMDb Mini Biography By: Anonymous, Denise P. Meyer, and Pedro Borges

Amazon Video has the most number of Gary Oldman’s flixes, followed by Vudu compared to other streaming platforms. See the full graph below.

On average the IMDB score of the movies that Gary Oldman has worked on is 6.5.

Mathilda, a 12-year-old girl, is reluctantly taken in by Léon, a professional assassin, after her family is murdered. An unusual relationship forms as she becomes his protégée and learns the assassin's trade.

Eight years after the Joker's reign of anarchy, Batman, with the help of the enigmatic Catwoman, is forced from his exile to save Gotham City from the brutal guerrilla terrorist Bane.

Host Adam Savage collaborates with notable experts to build some of the most ambitious projects in his career.

Action,Adventure,Drama
Dawn of the Planet of the Apes (2014)

A growing nation of genetically evolved apes led by Caesar is threatened by a band of human survivors of the devastating virus unleashed a decade earlier.

In the colorful future, a cab driver unwittingly becomes the central figure in the search for a legendary cosmic weapon to keep Evil and Mr. Zorg at bay.

In May 1940, the fate of World War II hangs on Winston Churchill, who must decide whether to negotiate with Adolf Hitler, or fight on knowing that it could mean the end of the British Empire.