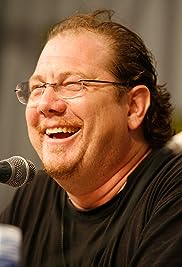 Fred Tatasciore is a voice actor/animator known for his work in film, television and games. He can be heard regularly on Fox's "Family Guy," "American Dad," and "The Cleveland Show." He plays Aaarggggh! and many characters on the new show, "Trollhunters" (for Netflix by Guillermo Del Torro), For Marvel, he has voiced Hulk/Banner, Beast, Thing, and Crossbones in countless animated roles, including "Hulk and the Agents of Smash," "Avengers Assemble," "MARVEL Spiderman" (Max Model), and "Guardians of the Galaxy," "Ultimate Spiderman." For DC, He played various characters on "Batman, The Brave and the Bold," "DC Girls" as Bane, Solomon Grundy, Deathstroke, Gorilla Grod, Killer Croc, and "The Killing Joke"(as Ringmaster). He has also appeared on numerous Nickelodeon programs including "Breadwinners" (The Bread Maker), "Pig Goat Banana Cricket" (Thomas Jefferson), "Kung Fu Panda, Legends of Awesomeness" (Master Shifu), "Teenage Mutant Ninja Turtles" (Rocksteady), "Monsters vs. Aliens" (Vornicarn), "Sanjay and Craig" (Barfy the Dog), "Loud House", and "Invader Zim." He has worked with Disney Television on "Star and the Forces of Evil" (as Buffrog), "Ducktales," "Sofia the First" (as Harumph), "Future Worm," "Penn Zero: Part Time Hero" (Coach Egsgard), "Tangled", "Wander Over Yonder" (Monsters), "TRON, Uprising" (Flynn and Clue), and "Star Wars Rebels" (Boss Yushyn). His film work includes Star Wars: "The Last Jedi', "The Force Awakens," "Rogue One," as well as "IT," "Moana" (as KA), "Annabelle: Creation," DreamWork's,"Kung Fu Panda 2" (as Po's Panda father), "Kung Fu Panda 3" (Master Bear) Disney's "Frozen," "The Princess and the Frog" (Gators), and "Planes" (various). Other films he voiced are "9" (as 8), and "Team America," "Maleficent," "Wreck it Ralph," "The Emoji Movie," "The Huntsman" (as The Mirror Man), and "Dead Silence." Fred's work in videogames include "OVERWATCH" (Soldier 76), "Minecraft" (Jack), "Gears of War" (Damon Baird), "StarCraft" (Zeratul), "Mass Effect" (Saren Arterius), "Call of Duty" (Nikolai Belinsky), and "Ratchet and Clank" (Neftin Prog). In Disney Theme Parks, Fred can be heard as the voices of Darth Vader and Groot; various characters on "Star Tours" and "Soarin"; Bigfoot on "Everest" (Orlando), and the voice of "Space Mountain" for the past decade. - IMDb Mini Biography By: Amazon Video X-Ray

Amazon Video has the most number of Fred Tatasciore’s flixes, followed by Google Play Movies compared to other streaming platforms. See the full graph below.

On average the IMDB score of the movies that Fred Tatasciore has worked on is 6.9.

An exploration of our discovery of the laws of nature and coordinates in space and time.

Based on the award-winning educational apps, "StoryBots Super Songs" centers on the StoryBots, the curious little creatures who live in the world beneath our screens and help answer humans' biggest questions.

The daily surreal adventures of a blue jay and raccoon duo that attempt to deal with their mundane jobs as groundskeepers at the local park.

Based on the award-winning educational apps, the StoryBots are curious little creatures who live in the world beneath our screens and go on fun adventures to help answer kids' questions.

An ordinary boy finds a magic amulet that chooses him to be a Trollhunter, a guardian that defends the world of humans and the secret world of trolls.

After 74 villains break out of prison, Marvel's most powerful superheroes team up to capture all of them, and also to defend the Earth from widespread threats.