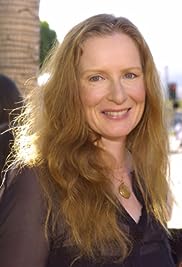 Award-winning veteran stage actress Frances Conroy was introduced and encouraged by her parents to explore the elements of theater. Born Frances Hardman Conroy in Monroe, Georgia on November 13, 1953, she attended high school in Long Island and experienced classes at the Neighborhood Playhouse as a teenager. The pale, blue-eyed redhead also studied drama at Dickinson College and the Juilliard School (BFA) where she was taught, at the latter college, by theater greats John Houseman and Marian Seldes.Following potent dramatic roles in such classical productions as "Mother Courage...and Her Children," "King Lear," "All's Well That Ends Well," "Measure for Measure" and "Othello" (as Desdemona) in the late 70s, Frances made her Broadway debut with "The Lady from Dubuque" in 1980. She went on to earn a well-respected name for herself under the Broadway and off-Broadway lights throughout the 1980s in such esteemed plays as "Our Town" (as Mrs. Gibbs), "The Little Foxes (as Birdie) and "In the Summer House." She also appeared with Ms. Seldes in the well-received plays "Ring 'Round the Moon" and "A Bright Room Called Day."A performer with the The Acting Company, Frances won a Drama Desk Award for "The Secret Rapture" and an Obie for "The Last Yankee." In 2000 she received the Outer Critics Circle Award and a Tony nomination for "The Ride Down Mt. Morgan." Her other Broadway credits include "Ring Round the Moon", "The Little Foxes", "The Rehearsal" (Drama Desk Nominee), "Broken Glass", "In the Summer House" (Drama Desk Nominee) and "The Secret Rapture" (Drama Desk Nominee). Conroy's numerous Off- Broadway plays include "The Dinner Party", "The Skin of Our Teeth", "The Last Yankee" and "Othello" (Drama Desk Nominee).An actress of subtle power, great depth and astonishing versatility, she has both an aloof serenity and faintly sad/sensitive ambiance that makes her all the more mysterious and intriguing. She came out to California in 1985 at the invitation of director Houseman and appeared in more theater plays, including "Richard III," at San Diego's Globe Theater. She also earned a sprinkling of generally overlooked film and TV parts, including small parts in Woody Allen's Manhattan (1979) (debut), Eine andere Frau (1988) and Verbrechen und andere Kleinigkeiten (1989). Showing a distinct flair for the offbeat and neurotic, nothing really pushed the envelope for her on screen quite like her series' turn as the dowdy, emotionally frail undertaker's widow Ruth Fisher in the cult hit TV series Six Feet Under - Gestorben wird immer (2001). During the five-season run she won both a Golden Globe and three Screen Actors Guild awards and was nominated four times for an Emmy.Film roles have been sparse, marking her then, she has been offered a number of interesting, more prominent parts in such movies as Die, Mommie, Die! (2003), Catwoman (2004), Aviator (2004), Shopgirl (2005), Wicker Man - Ritual des Bösen (2006), House Party: Episode dated 26 December 1966 (1966) and Welcome to Happiness (2015). She has also appeared in several other TV series of late, most notably American Horror Story (2011) in which she earned her fifth and sixth Emmy nomination.In 1992, she married actor/husband Jan Munroe, an L.A. performance artist. After a six-year absence from theatre work, Frances returned in a 2006 production of "Pyrenees" by David Greig at the Kirk Douglas Theater in Los Angeles. - IMDb Mini Biography By: Gary Brumburgh / gr-home@pacbell.net

Amazon Video has the most number of Frances Conroy’s flixes, followed by Vudu compared to other streaming platforms. See the full graph below.

On average the IMDB score of the movies that Frances Conroy has worked on is 6.6.

A chronicle of the lives of a dysfunctional family who run an independent funeral home in Los Angeles.

In Gotham City, mentally troubled comedian Arthur Fleck is disregarded and mistreated by society. He then embarks on a downward spiral of revolution and bloody crime. This path brings him face-to-face with his alter-ego: the Joker.

An anthology series centering on different characters and locations, including a house with a murderous past, an insane asylum, a witch coven, a freak show circus, a haunted hotel, a possessed farmhouse, a cult, the apocalypse, and a slasher summer camp.

A comedy series about a bachelor brother and his newly divorced sister living under one roof again. Together, they coach each other through the crazy world of dating while raising her teenage daughter.

An old patriarch unites for his birthday all members of his family. But the group of people is full of personal and social problems.

A forensic psychiatrist discovers that all but one of her patient's multiple personalities are murder victims. She will have to find out what's happening before her time is finished.

A scientist meets a version of himself from the future who has traveled back in time to stop himself from inventing time travel.

This is the story of the decades-long love affair between June Carter and her husband, Johnny Cash, a love that was stretched to the breaking point by Johnny's addiction to pills.