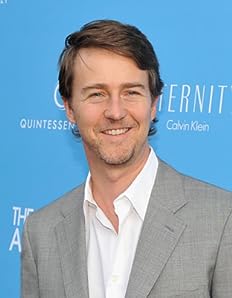 American actor, filmmaker and activist Edward Harrison Norton was born on August 18, 1969, in Boston, Massachusetts, and was raised in Columbia, Maryland.His mother, Lydia Robinson "Robin" (Rouse), was a foundation executive and teacher of English, and a daughter of famed real estate developer James Rouse, who developed Columbia, MD; she passed away of brain cancer on March 6, 1997. His father, Edward Mower Norton, Jr., was an environmental lawyer and conservationist, who works for the National Trust for Historic Preservation. Edward has two younger siblings, James and Molly.From the age of five onward, the Yale graduate (majoring in history) was interested in acting. At the age of eight, he would ask his drama teacher what his motivation in a scene was. He attended theater schools throughout his life, and eventually managed to find work on stage in New York as a member of the Signature players, who produced the works of playwright and director Edward Albee. Around the time when he was appearing in Albee's Fragments, in Hollywood, they were looking for a young actor to star opposite Richard Gere in a new courtroom thriller, Peur primale (1996). The role was offered to Leonardo DiCaprio but he turned it down. Gere was on the verge of walking away from the project, fed up with the wait for a young star to be found, when Edward auditioned and won the role over 2000 other hopefuls. Before the film was even released, his test screenings for the part were causing a Hollywood sensation, and he was soon offered roles in Woody Allen's Tout le monde dit I love you (1996) and Larry Flynt (1996). Edward won the Golden Globe for Best Actor in a Supporting Role and received an Oscar nomination for Best Supporting Actor for his performance in Peur primale (1996). In 1998, Norton gained 30 pounds of muscle and transformed his look into that of a monstrous skinhead for his role as a violent white supremacist in American History X (1998). This performance earned him his second Oscar nomination, this time for Best Actor.He received his third Oscar nomination, for Best Supporting Actor, for his work in Birdman (2014). His most prominent roles also include the critically acclaimed Tout le monde dit I love you (1996), Larry Flynt (1996), Fight Club (1999), Dragon rouge (2002), La 25ème heure (2002), Kingdom of Heaven (2005), L'illusionniste (2006), Moonrise Kingdom (2012), and The Grand Budapest hotel (2014). He has also directed and co-written films, including his directorial debut, Au nom d'Anna (2000). He has done uncredited work on the scripts for The Score (2001), Frida (2002), and L'incroyable Hulk (2008).Alongside his work in cinema, Norton is an environmental and social activist, and is a member of the board of trustees of Enterprise Community Partners, a non-profit organization for developing affordable housing founded by his grandfather James Rouse. - IMDb Mini Biography By: TrendEkiD@aol.com and Pedro Borges

Amazon Video has the most number of Edward Norton’s flixes, followed by YouTube compared to other streaming platforms. See the full graph below.

On average the IMDB score of the movies that Edward Norton has worked on is 7.1.

An insomniac office worker and a devil-may-care soapmaker form an underground fight club that evolves into something much, much more.

A former neo-nazi skinhead tries to prevent his younger brother from going down the same wrong path that he did.

Set in Japan, Isle of Dogs follows a boy's odyssey in search of his lost dog.

Comedy,Drama
Birdman or (The Unexpected Virtue of Ignorance) (2014)

A washed-up superhero actor attempts to revive his fading career by writing, directing, and starring in a Broadway production.

An altar boy is accused of murdering a priest, and the truth is buried several layers deep.

In turn-of-the-century Vienna, a magician uses his abilities to secure the love of a woman far above his social standing.

Around the globe, scientists are racing to solve a series of mysteries. Unsettling transformations are sweeping across the planet, and clue by clue, investigators around the world are ...