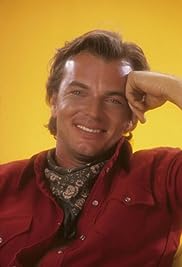 The only son of Les arpents verts (1965) star Eddie Albert and Mexican actress/dancer Margo, Edward Laurence Albert managed to come out from under his father's strong shadow and make a gallant showing of his own as a gifted thespian. Born in Los Angeles on February 20, 1951, Edward's multi-cultural heritage and talented gene pool allowed him to become a man of many talents: songwriter, drummer, singer, photographer and, most importantly, activist.Growing up, he inherited an early interest in music and the performing arts. He made an auspicious film debut at the age of 14 in The Fool Killer (1965) co-starring as a young runaway who teams up with a tormented Civil War veteran (Anthony Perkins), a teaming that leads to murder. A strong, mature role for such a youngster, his next film appearance wouldn't come about until seven years later. In the meantime Edward attended Oxford University and was studying psychology at UCLA when offered the breakthrough of a lifetime.Signed up to play the difficult role of blind Don Baker--played on Broadway by Keir Dullea--who yearns for freedom away from his domineering mom (Oscar winner Eileen Heckart) and finds it in the arms of a liberated lass named Jill (Goldie Hawn) in Butterflies Are Free (1972), Edward easily captured the hearts of millions with his tender, life-affirming performance. Edward walked home with the cinema's Golden Globe Award as "Male Newcomer of the Year." A confident, intelligent actor with a serene handsomeness and 1000-watt smile who just happened to possess the most magnetic pale eyes this side of Meg Foster, Edward was on a seemingly strong path to film stardom. Although he never found a comparable success to "Butterfly," he did follow it up with another theater comedy favorite, 40 Carats (1973), in which he had a dalliance with older actress Liv Ullmann. He also played Charlton Heston's military son in La bataille de Midway (1976), followed by highly visible roles in La théorie des dominos (1977) and L'empire du Grec (1978).When film stardom did not pan out, Edward saw TV as a welcoming medium and made up for his sudden lack of star power with wonderful turns in major TV minimovies, notably The Last Convertible (1979). By the 1980s he had started making the rounds in formula low-budget action films and usually fared best when his flashy villainous side came into view. While such obvious movie titles as La maison des spectres (1982), Fist Fighter (1989), Demon Keeper (1994) and Stageghost (2000) pointed out the lack of quality in his offerings, it did provide a steady income and visibility. He also made frequent guest appearances on such shows as Falcon Crest (1981), La loi de Los Angeles (1986), Star Trek: Deep Space Nine (1993) and Docteur Quinn, femme médecin (1993) that kept him in the public eye. A solid regular as both good guy and bad guy on series TV, he gave his life (and, it seems, his paycheck) to the Beast after three seasons on La belle et la bête (1987) and, in contrast, played the dastardly Dr. Bennett Devlin on the daytime soap Port Charles (1997) for its first three seasons. Edward also used his vocal talents in animation involving such superhero icons as The Fantastic Four (1978), Spider-Man (1994) and "The Power Rangers".From his father and mother Edward developed a deep love and appreciation for the land and the diversity of cultures. As such, he divided his time between acting work and activism just as his father had done. Having owned a ranch in Malibu for over 30 years, he was a strong, positive influence and passionate spokesperson when it came to environmental and cultural affairs. In recent years he served on the California Coastal Commission and California Native American Heritage Commission.Long married to lovely British-born actress Katherine Woodville, the couple's daughter, Thais, continued the family musical tradition as a singer/songwriter for the rock group Sugar in Wartime. Following his mother's passing from brain cancer in 1985, Edward became a selfless caregiver to his aging father, who began to develop early signs of Alzheimer's disease in the 1990s. His father lived for more than a decade in declining health, dying in May 2005. In early 2005, Edward discovered he too was seriously ill after being diagnosed with lung cancer. He died surrounded by family on September 22, 2006, at the relatively young age of 55. - IMDb Mini Biography By: Gary Brumburgh / gr-home@pacbell.net

Amazon Video has the most number of Edward Albert’s flixes, followed by Vudu compared to other streaming platforms. See the full graph below.

On average the IMDB score of the movies that Edward Albert has worked on is 5.4.

A blind man moves into his own apartment against the wishes of his overprotective mother and befriends the freethinking young woman next door.

When a crimelord from the year 3000 finds that times are too tough, he goes back in time to 2001. And the Power Rangers of year 3000 come back to battle him. Things only get crazier when ...

A former U.S. First Lady wants a particular Secret Service agent to head her bodyguard detail, even though he can't stand her.

Several couples are notified that they have won an ocean cruise, but they actually have been lured onto a ship so that they can be murdered.

A group of kids venture into enemy territory in an ambitious attempt to rescue their Navy Seal fathers who were captured during a failed mission in North Korea.

Rita and Dana Lund's marriage is in a crisis, Rita's frustrated from being just a housewife. To save their marriage, they set out for a camping trip through California with their son. At a ...

A retired safe cracker is recruited by a young conman to return to the "business" for a million dollar heist.