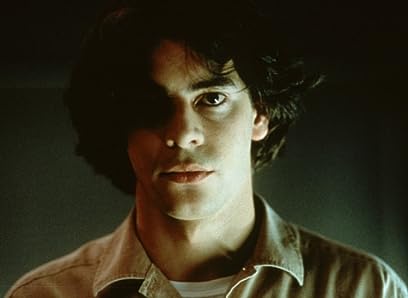 Eduardo Noriega Gómez was born in Santander, Cantabria, Spain. The youngest of 7 siblings, he had shown a very big talent for artistic activities since he was a child. He began taking piano lessons and got into the Santander Music Conservatory, where he studied for five years. His music professors discovered that he had many conditions for playing piano, so they would keep him practicing for hours until he got tired of it and quit. After finishing high school, he decided to become a lawyer and majored at University of Santander, one of the most prestigious universities in Europe.That wouldn't last long either, because he got the acting bug by chance when attended an acting class alongside a friend that wanted to be an actress, he was invited to participate and enjoyed it enough to do that for living. At 19, he relocated to Madrid to start his drama classes at the R.E.S.A.D. (Madrid Acting Conservatory) and tried to continue with Law School attending the U.N.E.D. (a college where people can study even if they live far away), but due to the time the acting classes demanded him, couldn't focus on his other career and quit after passing the first signature. Once at the Conservatory he met Mateo Gil and Alejandro Amenábar, who was searching for good average students to make his first short films. Noriega shot a few shorts with both of them until he landed one of the starring roles in Amenábar's opera prima Faszination des Grauens (1996). This movie became the most successful movie of the year in Spain and Eduardo Noriega and Fele Martínez became huge stars. In 1996, Eduardo had a tiny part in Pedro Olea's Más allá del jardín (1996) and the main role in Cuestión de suerte (1996), shot in San Sebastián. During the making of this movie, his mother passed away and he channeled his grief into work by making Virtual Nightmare - Open Your Eyes (1997), another Amenábar's movie that became one of the suspense classics worldwide. This part gave Noriega his first Goya Award nomination, but he lost to Fernando Fernán Gómez, although he was consecrated as a very promising actor. Soon after, he tried himself in comedy by taking part in the movie Cha-cha-chá (1998) where he showed his skills as a comedian and met who would be his girlfriend for two years: Ana Alvarez. The relationship ended in good terms and afterward, he arrived to Argentina to make another movie that would become a cult one: Burnt Money (2000). This flick won the Goya Award in 2001 and Eduardo met his now friend Leonardo Sbaraglia. Between 2001 and 2004, he made movies in France, Madagascar and Spain. 2004 was the year that gave him the chance to play a real life character for first time in the movie El Lobo (2004). He played Txema, an insider infiltrated in ETA who gave information to the government to dismantle the terrorist group. Critics and people loved his interpretation and earned him a second Goya nomination. Next year, he had the chance to play another controversial character: Che Guevara, becoming the first Spanish actor to play it. In 2006 The Method (2006) was released at the same time that the theater play and became a blockbuster in Spain and Argentina, Marcelo Piñeyro was the director and also had directed Burnt Money (2000). His most challenging role was yet to come, nevertheless: Vicente Aranda was preparing to direct Canciones de amor en Lolita's Club (2007)and also looking for an actor who dared play twins who where identical in the outside but totally different inside, because one was a violent smart cop and the other one a mentally retarded sweet man. On December 3, 2007 he won the GQ award as the "Actor of the Year". In 2008 he participated in two American movies: 8 Blickwinkel (2008) and Transsiberian (2008). In 2009 he re-teamed with Amenábar (this time as a producer, not director) in El mal ajeno (2010), where he had to look older to play an apparently cold-blooded doctor that used to deal with terminal patients, but his life is stricken when his teenage daughter becomes his patient. With this movie, Eduardo showed his maturity as an actor and next year he could fulfill a dream: making a western. Blackthorn (2011) told the story of Butch Cassidy in exile while staying in Bolivia. Sam Shepard and Stephen Rea were part of this superb cast as well. During the half of 2011 a new suspense TV series called Homicidios (2011) began to be promoted on channel Tele5. This thriller meant the return of Eduardo Noriega to television (he had only had a small part in the 1994-1996 show "Colegio Mayor"). "Homicidios" premiered on 20 September 2011 in prime-time with a very high rating. Although it was switched to different times until even midnight, it had the highest audience of his all time branches. In 2013 he will release the movie The Last Stand, alongside Arnold Schwarzenegger. - IMDb Mini Biography By: Noelia Urdangaray

Amazon Video has the most number of Eduardo Noriega’s flixes, followed by Google Play Movies compared to other streaming platforms. See the full graph below.

On average the IMDB score of the movies that Eduardo Noriega has worked on is 6.1.

A very handsome man finds the love of his life, but he suffers an accident and needs to have his face rebuilt by surgery after it is severely disfigured.

After Carlos - a 12-year-old whose father has died in the Spanish Civil War - arrives at an ominous boys' orphanage, he discovers the school is haunted and has many dark secrets which he must uncover.

While doing a thesis about violence, Ángela finds a snuff video where a girl is tortured until death. Soon she discovers that the girl was a former student in her faculty...

Nene & Angel and their accomplice Cuervo participate in a botched bank robbery in 1965 Buenos Aires, then hide out from the police in Uruguay while the gang breaks down.

One man, one woman, one rule: not fall in love.

Inspired by real events, Hache is the story of Helena, a woman catapulted to the heroin trafficking business in the Barcelona of the 60s.

In Bolivia, Butch Cassidy (now calling himself James Blackthorn) pines for one last sight of home, an adventure that aligns him with a young robber and makes the duo a target for gangs and lawmen alike.

A nurse and her daughter flee her husband's drug-trafficking past in Mexico and assume new identities in Spain, but still face danger in Madrid.