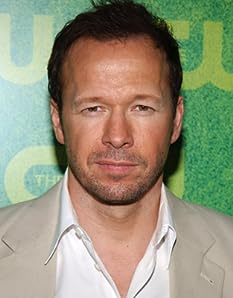 Donald Edmond Wahlberg, Jr. was born August 17, 1969 in Dorchester Massachusetts, into a family of Swedish (from his paternal grandfather), Irish, and more distant French-Canadian, English, and Scottish, descent. He is the eighth of nine children of Alma Elaine (Donnelly), a nurse's aide and clerk, and Donald Edward Wahlberg, a delivery driver. His parents eventually divorced and Donnie, finding himself already in trouble, discovered a positive outlet performing in school plays and became involved in varied aspects of theater -- acting, writing, and directing. At the age of 15, he became a member of the teen vocal group originally called "NYNUK." Donnie's younger brother, Mark Wahlberg, was originally one of the Boys but balked at the direction the group was taking and backed out.Following a false start with their debut album "New Kids on the Block," the teens persevered with a sophomore record and proceeded to hit #1 with the single "Please Don't Go Girl" in 1988. They continued to bombard the market with one-after-another "Top Ten" hits including "The Right Stuff" and "I'll Be Loving You Forever." Leaving the young girls panting for more, they became one of the hottest young singing/line-dancing groups to hit the late 80s/early 90s. The Boys went on to sell over 70 million albums worldwide, and provoke the spawning of other five-member harmony groups such as Backstreet Boys and *NSYNC. During its heyday, Donnie played up his resident "bad boy" persona by tallying up several run-ins with the law, including an alleged arson at a Kentucky hotel (charges were dropped). He also delved into "body art" with numerous tattoos and body piercings in an effort to buck their already-cloying image. Amid intergroup dissension and Milli Vanilli-like charges of not contributing all the vocals to their albums, the pop band finally disbanded in 1994 -- partly out of frustration but also having outgrown the group's juvenile moniker.Unsure of his direction while attracting more trouble in the tabloids, Donnie, who helped write, arrange and produce brother Mark's Funky Bunch group's first two albums a few years earlier, switched gears. He rapped some and modeled some, then transformed himself into an actor, a route taken earlier by his talented bro. While Mark has turned out to become the bigger film star over the years, Donnie has stepped out of his shadows to receive raves and renewed respect for his own tense and compelling character work.He first showed up in big screen action. Making his debut as a "tough guy" thug in the Mickey Rourke urban outing Bullet (1996), filmed in 1994 but not released until two years later. Usually cast as an amoral heavy, Donnie moved up the quality ladder with director Ron Howard's thriller Rescate (1996) as part of a gang of kidnappers who nab Mel Gibson's son, to their eventual regret, of course. His next repellent took the form of a drug dealer in the goth indie horror Los chicos del círculo negro (1997), but the film came and went. After a couple of TV movies, he finally nabbed a starring role in the film Southie (1998) playing more or less himself as an Irish-American prodigal son who returns to the mean streets of his native Boston. The movie also featured another brother Robert Wahlberg who also was testing the acting waters.Ironically, one of Donnie's most powerful roles during this period was also one of his briefest. Seen in the opening sequence, he is nearly unrecognizable (having dropped an alarming amount of weight) portraying a deranged former patient of psychiatrist Bruce Willis whose sudden explosion into unfathomable violence sets up the clever twists and turns that turned M. Night Shyamalan's classic psychological thriller El sexto sentido (1999) into a critically-acclaimed box office hit. Donnie's opening bit was mouth dropping and jarring in its horror. He also proved he wasn't a flash in the pan by backing up this performance with a major role as a WWII paratrooper in the critically-hailed ten-part epic Hermanos de sangre (2001), which won multiple Emmy awards (6).This TV role directly led to his casting as a gritty L.A. detective in the NBC dramatic series Metrópolis (2002), an acclaimed series that didn't survive a second season. Since then Donnie has patented his unrefined intensity into a number of other films such as Triggermen: perseguidos por la mafia (2002) and Saw II (2005). He lives in Los Angeles with his wife, Kim Fey, and sons Xavier and Elijah. As a former teen heartthrob seemingly headed down a troubled and dangerous path after his initial success, he somehow managed to avoid the traditional pitfalls of drugs and self-destruction, and has since proven himself an actor with "the right stuff." - IMDb Mini Biography By: Gary Brumburgh / gr-home@pacbell.net

Amazon Video has the most number of Donnie Wahlberg’s flixes, followed by Vudu compared to other streaming platforms. See the full graph below.

On average the IMDB score of the movies that Donnie Wahlberg has worked on is 6.5.

The story of Easy Company of the U.S. Army 101st Airborne Division, and their mission in World War II Europe, from Operation Overlord, through V-J Day.

Revisiting the twisted lives of some of the most frightening, diabolical characters in recent history. The stories trace the heinous, criminal acts of these elusive miscreants and the eventual road to justice.

Revolves around a family of New York cops.

A group of military veterans, who recently returned home from serving in Iraq, band together to pull off a major bank heist.

A thirty-years traveling diamond salesman must mentor a brash young replacement when his company downsizes him.

A look at the personal and professional life of Boston chef Paul Wahlberg and his real-life entourage as he prepares to expand his hamburger restaurant business.

Officers of the Boston Police Department live in the city they protect and work to balance fighting crime with finding time for family.

Two childhood friends from South Boston turn to crime as a way to get by, ultimately causing a strain in their personal lives and their friendship.