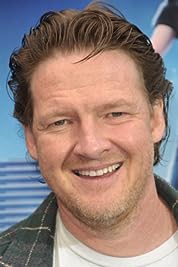 Donal Logue's versatility and talent makes him one of the most well respected and beloved actors today. Born in Ottawa, Canada, Logue moved all over the United States, from the Boston area as an infant to various towns on the Mexican border. He returned to Boston to attend Harvard University, where he majored in Intellectual History and discovered his love for the performing arts. While in college, he appeared in over thirty plays, worked for two summers in the American Repertory Theatre's Harvard/Radcliffe Summer Stock Company, and spent a short time doing theatre in England. After graduating, Logue joined the Cornerstone Theatre Company which developed community theatre in rural parts of the United States. From then on Logue dedicated himself to pursuing his passion for acting. In his 20 plus years in the industry, Logue has starred in films such as, The Tao of Steve, the story of a larger-than-life, philosophizing lothario, which debuted at the Sundance Film Festival, and won him a Special Jury Prize for Outstanding Performance. His other film credits include Sneakers, Gettysburg, Blade, Runaway Bride, Reindeer Games, The Million Dollar Hotel, Comic Book Villains with Michael Rapaport, Confidence, Just Like Heaven, and The Groomsmen with Ed Burns. Recently, Donal co-starred in Max Payne with Mark Wahlberg, as well as Charlie St. Cloud with Zac Ephron. He also appeared in Zodiac, directed by David Fincher, based on the Robert Graysmith books about the notorious Zodiac serial killer. Following the US release of Zodiac, he co-starred in Mark Steven Johnson's Ghost Rider with Nicolas Cage and Eva Mendes. Logue made his directorial debut with the independent film Tennis, Anyone?, which appeared at the US Comedy Arts Festival. He wrote, starred, and directed the film about two Hollywood has-beens who try and find meaning in their lives through a series of celebrity tennis tournaments. In television, Logue joined the cast of the NBC series "LIFE" about a former police officer who returns to the force after having been wrongly imprisoned for years. In 2007, he headlined the critically lauded ABC comedy "The Knights of Prosperity" in which a group of blue collar guys band together to plan a heist of Mick Jagger's New York City apartment. Prior to "The Knights of Prosperity" Logue starred in the Carsey-Warner produced show, "Grounded for Life" which aired for five seasons. He was also featured in a recurring role on "ER" as Sherry Stringfield's love interest. In 2010, Logue finished a critically acclaimed season on "Terriers," a television series created by Ted Griffin and Shawn Ryan for FX. He begins production on the Marc Cherry pilot "Hallelujah" for ABC in March of 2011. Logue lives in Los Angeles and has two children. - IMDb Mini Biography By: Peggy Ryan <rryan@mail.sdsu.edu>

Amazon Video has the most number of Donal Logue’s flixes, followed by Google Play Movies compared to other streaming platforms. See the full graph below.

On average the IMDB score of the movies that Donal Logue has worked on is 6.5.

A former police officer returns to the force after having been wrongly imprisoned for years.

The story behind Detective James Gordon's rise to prominence in Gotham City in the years before Batman's arrival.

Having spent much of his early life in prison, actor Danny Trejo discusses his career and how he has overcome a life of crime and addiction.

Comedy,Crime
The Knights of Prosperity (2007)

A group of blue-collar guys scheme to rob a celebrity in New York City.

A lonely landscape architect falls for the spirit of the beautiful woman who used to live in his new apartment.

Comedy,Drama,Romance
The Tao of Steve (2000)

Underachieving, overweight kindergarten teacher Dex finds a woman who forces him to reexamine his Zen-like system of seduction.