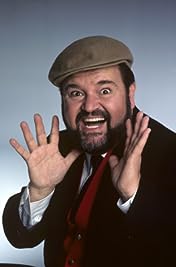 Amazon Video has the most number of Dom DeLuise’s flixes, followed by Google Play Movies compared to other streaming platforms. See the full graph below.

On average the IMDB score of the movies that Dom DeLuise has worked on is 5.9.

Adventure,Animation,Drama
The Secret of NIMH (1982)

To save her ill son, a field mouse must seek the aid of a colony of rats, with whom she has a deeper link than she ever suspected.

A time capsule of the L.A. comedy scene in the 1970s, "Diary of a Young Comic" casts Richard Lewis as a fictionalized version of himself - a young New York comic who comes out to Los Angeles to seek his fame and fortune.

The meanest villain in the West falls for a pretty schoolteacher and tries to change his ways, but a determined (and egomaniacal) singing sheriff is out to capture him.

By the same people that brought us "Flintstones, The" (1960), this similar cartoon was about people living in Rome in 63 A.D.

While emigrating to the United States, a young Russian mouse gets separated from his family and must relocate them while trying to survive in a new country.

Comedy,History,Musical
History of the World: Part I (1981)

Mel Brooks brings his one-of-a-kind comic touch to the history of mankind covering events from the Old Testament to the French Revolution in a series of episodic comedy vignettes.

Adventure,Animation,Comedy
All Dogs Go to Heaven (1989)

A canine angel, Charlie, sneaks back to earth from heaven but ends up befriending an orphan girl who can speak to animals. In the process, Charlie learns that friendship is the most heavenly gift of all.

Adventure,Animation,Comedy
All Dogs Go to Heaven: The Series (1996)

This is the continuing adventures of Charlie and Itchy of "All Dogs Go To Heaven" movie fame. Now the pair are living in San Francisco, doing missions for Heaven on Earth, as directed by ...