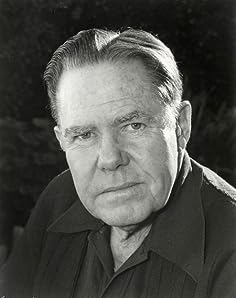 Daws Butler spent the greater part of his career as one of the premier voice-over actors in Hollywood- providing the voices for such well- known characters as Yogi Bear, Huckleberry Hound, Quick-Draw McGraw, Snagglepuss, Jinks the cat, Dixie the mouse, Augie Doggie, Peter Potamus, Wally Gator, Hokey Wolf, Super Snooper, Blabber Mouse, Cogswell Cogs, Elroy Jetson and many others. He also provided the voices for such long-running commercial characters as Snap, diminutive companion of Crackle and Pop of noisy cereal fame, as well as Cap'n Crunch, spokesman for a somewhat quieter breakfast treat.Butler was born in Toledo, Ohio and spent his formative years in Oak Park, Illinois. Although his initial ambition was to be a cartoonist, he had a talent for vocal humor and mimicry as well. Paradoxically, he was also quite shy. As a sort of self- imposed therapy, he forced himself to address large audiences by entering local amateur contests and performing impersonations of Franklin D. Roosevelt, Rudy Vallee and a Model T Ford starting on a cold morning (an audience favorite). He found that the laughter and applause he got in response was well worth the effort and it clinched his decision to pursue an acting and performing career. Eschewing the last few months of his senior year in high school, he began appearing in Chicago theaters and nightclubs along with two other impersonators he had met along the way. Because they all maxed out at around five feet, two inches in height and primarily did impressions of radio personalities, they billed themselves as "The Three Short Waves."After two years in the Navy during World War II, during which he met and married Myrtis Martin of Albemarle, N.C. (whose next-door neighbor provided the inspiration for what would later become the southern drawl of Huckleberry Hound), Butler ferried his wife and son out to Hollywood. He finally broke into radio, performing in dramatic as well as comedy programs and specializing in dialects and a wide range of vocal characterizations.In 1949, Butler and Stan Freberg were featured in a new television puppet show called "Time for Beany." Butler was the voice of a propeller-capped kid named Beany while Freberg voiced his best pal, Cecil the Seasick Sea Serpent. During five years of five shows a week, they were honored with two Emmy awards.At Capitol Records in the early 1950s, Butler and Freberg co-wrote and co-voiced a comedy record takeoff on the TV show "Dragnet," called "St. George and the Dragonet." Not only was Jack Webb flattered and amused by the record, but it was the first comedy record to sell more than a million copies. Butler's and Freberg's partnership produced several other comedy platters beloved by disc jockeys across the country, even today. Butler was also a part of Freberg's comedy ensemble on the Stan Freberg Radio Show in the summer of 1957 and on a later and very popular comedy single called "Christmas Dragnet."After lengthy and very productive collaborations with famed animators/directors Tex Avery and Walter Lantz, Butler embarked on yet another inspired partnership, with William Hanna and Joseph Barbera at Hanna-Barbera Productions. There, beginning in the late 50s, Butler created his most famous cartoon characterizations, aided and abetted by another gifted voice actor, Don Messick-Boo Boo and Ranger Smith to Butler's Yogi Bear and Pixie the Mouse to his Dixie, among others.For legendary cartoon producer Jay Ward, Butler, along with fellow actors and friends June Foray and Bill Scott, performed in two animated series, "Fractured Fairy Tales" and "Aesop and Son." His long-running Cap'n Crunch character was also a Jay Ward creation.In his later years, Butler established a popular and respected actors' workshop in his home, training talented students not only in voice- over techniques, but in all areas of acting, including the physical. On that subject, especially, one had only to witness Butler's histrionic physicality when voicing Yogi Bear or his laid- back, sleepy-eyed mien as he became Huckleberry Hound to understand why he considered facial expression and physical movement as essential as sound in producing a living, breathing character. One of Butler's star workshop students was Nancy Cartwright, later the voice of Bart Simpson on "The Simpsons." Daws Butler passed away on May 19, 1988 of a heart attack, having just completed three Yogi Bear films and 15 new half-hour Yogi Bear cartoon shows. He also lived to see the rebirth of The Jetsons for a new generation, voicing 30 of the new shows along with all the members of the original cast. During his longest- standing creative collaboration, the 30-odd years with Hanna-Barbara Productions, Daws Butler performed in the neighborhood of 40 different characters. In the years that followed his death, seven actors were required to replace them all. - IMDb Mini Biography By: David T. Butler

Amazon Video has the most number of Daws Butler’s flixes, followed by Boomerang compared to other streaming platforms. See the full graph below.

On average the IMDB score of the movies that Daws Butler has worked on is 6.8.

The various Hanna Barbera characters compete in their own version of the Olympic Games.

Hosted by Fred Flintstone, this show featured a repackaging of The Flintstone Comedy Hour, Goober and the Ghost Chasers, Jeannie, Partridge Family 2200 A.D., The Pebbles and Bamm-Bamm Show and Yogi's Gang.

Yogi, Boo Boo and Cindy are awakened from hibernation and join their friends' Christmas activities while interfering with two villains' efforts to ruin the holiday.

Yogi and the gang go on treasure hunts all around the world, as assigned by Top Cat. They travel on board their ship, the S.S. Jelly Roger. Dick Dastardly and Muttley follow them with their...

The new adventures of Popeye the Sailor Man and his friends.

A kung-fu-fighting pup and his snickering cat sidekick battle crime.

By the same people that brought us "Flintstones, The" (1960), this similar cartoon was about people living in Rome in 63 A.D.