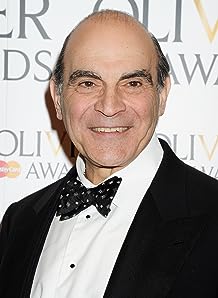 Widely regarded as one of the England's finest stage, screen and TV actors, short, stocky, balding David Suchet's international reputation has only grown over the years, greatly enhanced by his definitive interpretation of Agatha Christie's suave Belgian super-sleuth Hercule Poirot, a character he played for nearly 25 years in various TV episodes (1988-2013). Born in London on May 2, 1946, the son of actress Joan Patricia Jarché and renowned Lithuanian-Jewish obstetrician and gynecologist Jack Suchet, David, following boarding school, took an early desire in acting and was given a membership with the National Youth Theatre of Great Britain at age 16. He then studied for three years at the London Academy of Music and Dramatic Arts and, after a significant route in repertory work, became a company member of the Royal Shakespeare Company in 1973 where he evolved into one of its most dominant players.In the 1970s Suchet also began to come into his own on British television. In classical tradition, his first television movie was A Tale of Two Cities (1980). His first cinematic detective was as a Greek inspector in the Disney mystery-comedy Trenchcoat (1983). This was followed by a versatile range of film roles that also express the width of his acting nationalities, such as a Middle Eastern terrorist in The Little Drummer Girl (1984), a Russian operative in Сокіл і Сніговик (1985), a French hunter in Гаррі й Гендерсони (1987), a Polish bishop in To Kill a Priest (1988) and the emperor Napoleon in Sabotage! (2000).Suchet's masterful work in television roles also includes portrayals of historical, biblical, entertainment and fictional figures, such as Sigmund Freud in Freud (1984), news reporter William L. Shirer in Murrow (1986), Aaron in Moses (1995), movie mogul Louis B. Mayer in RKO 281 (1999), Cardinal Wolsey in Henry VIII (2003)), vampire nemesis Van Helsing in Dracula (2006) and Robert Maxwell in Maxwell (2007).Suchet's memorable theatre incarnations have included Shakespearean interps of Iago in "Othello", Tybalt in "Romeo and Juliet", Caliban in "The Tempest" and the title role of "Timon of Athens," as well as vibrant classical roles such as George in "Who's Afraid of Virginia Woolf?" (1996), as composer Salieri in "Amadeus" (1998), a mesmerizing performance that earned both Olivier and Tony nominations, as Joe Keller in "All My Sons" (2010), as James Tyrone in "Long Day's Journey Into Night" (2012) (and in the 2014 film), as Lady Bracknell in "The Importance of Being Earnest" (2015) (and in the 2015 film) and as Gregory Solomon in "The Price" (2019).Long wed to former actress Sheila Ferris, the couple has a son and daughter. His older brother is BBC newscaster-turned-journalist John Suchet. In 2011, David was awarded with the Queen's Commander of the Order of the British Empire (CBE). - IMDb Mini Biography By: Gary Brumburgh / gr-home@pacbell.net

Amazon Video has the most number of David Suchet’s flixes, followed by Google Play Movies compared to other streaming platforms. See the full graph below.

On average the IMDB score of the movies that David Suchet has worked on is 7.2.

In this travelogue, actor David Suchet journeys across Europe abroad the world famous Orient Express Train, as he prepares to play Poirot in an adaptation of Agatha Christie's "Murder on the Orient Express."

A con artist is conned into taking the job as Postmaster General in the Ankh-Morpork Post Office.

At the center of the story is Augustus Melmotte, a European-born city financier, whose origins are as mysterious as his business dealings. Trollope describes him as 'something in the city',...

Documentary
David Suchet: In the Footsteps of Saint Peter (2015)

Actor David Suchet goes in search of one of the most puzzling characters in history.

The orphan Pip becomes a gentleman when his life is transformed by a mystery benefactor.

The rise and fall of the Italian fascist dictator, Benito Mussolini.

Steven Dyer, an executive working for a giant multinational drugs company, decides to report his employer for breaches of Common Market trading regulations. One night in Basle, Switzerland,...