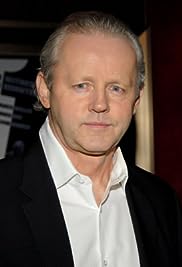 David Morse, a 6' 4" tall blue-eyed blond who performed on stage for 10 years before breaking into film, has become established as a respected supporting, character actor and second lead.He was born the first of four children of Charles, a sales manager, and Jacquelyn Morse, a schoolteacher, on October 11, 1953, in Beverly, Massachusetts. He grew up with three younger sisters. After graduating from high school, Morse studied acting at the William Esper Studio. In 1971, he began his professional acting career appearing in over 30 productions with the Boston Repertory Company from 1971 to 1977. In the late 1970s, Morse continued his stage career with the Circle Repertory Company in New York before moving into television and film. In the late 1990s, he returned to the Off-Broadway stage starring in Paula Vogel's Pulitzer Prize winning drama, "How I Learned to Drive" (1997), for which he won the Drama Desk Award and the Obie.Morse made his big screen debut in 1980 co-starring as "Jerry Maxwell", a cheerful bartender turned basketball player, opposite John Savage and Diana Scarwid in Rendez-vous chez Max's (1980), written by Barry Levinson and directed by Richard Donner. Although Rendez-vous chez Max's (1980) was nominated for an Oscar, Morse had to wait a few years until his career took off. His big break came in 1982 when he was cast as Dr. Jack "Boomer" Morrison, a young doctor who struggles as a single parent after the death of his wife, in Hôpital St. Elsewhere (1982), a medical drama that ran for six seasons. He co-starred as opposite Jodie Foster and young Jena Malone in the Oscar nominated Sci-Fi drama Contact (1997). In 1999, he appeared in Stephen King's La ligne verte (1999), with Tom Hanks. A year later, he played a supporting role as a kidnapped husband of Meg Ryan in L'échange (2000). In 2002, Morse became the first English-speaking actor nominated for the Golden Horse Award, the Chinese equivalent of the Oscars, for his superb performance as FBI expert "Kevin Richter" in Shuang tong (2002). From 2002 to 2004, Morse had a regular gig starring as "Mike Olshansky", an ex-Philadelphia policeman turned cab driver, in the TV series Le justicier de l'ombre (2002) which ran three seasons and was filmed in Philadelphia, close to his home. In 2006-2007, he has a recurring role on season 3 of an Emmy award-winning medical drama Dr House (2004).David Morse has been married to fellow actress Susan Wheeler Duff since 1982. They have three children, one daughter and twin sons. In 1994, after the the Northridge earthquake destroyed his home in Sherman Oaks, Morse moved from LA to Philadelphia with his family, and resides in his wife's hometown. - IMDb Mini Biography By: Steve Shelokhonov

Amazon Video has the most number of David Morse’s flixes, followed by Vudu compared to other streaming platforms. See the full graph below.

On average the IMDB score of the movies that David Morse has worked on is 6.4.

FLOWING WATER tells the story of the revitalization of the Longwood Garden's Main Fountain Garden - a lavish jewel in the crown of one of the greatest collections of fountains in the United States.

The lives of guards on Death Row are affected by one of their charges: a black man accused of child murder and rape, yet who has a mysterious gift.

The life of one of the USA's Founding Fathers, its second President, and his role in the nation's first 50 years.

A female prison employee, Tilly (Patricia Arquette) in upstate New York becomes romantically involved with a pair of inmates and helps them escape.

Crime,Drama,Musical
Dancer in the Dark (2000)

An East European girl travels to the United States with her young son, expecting it to be like a Hollywood film.

The lives and work of the staff of St. Eligius Hospital, an old and disrespected Boston teaching hospital.

A story of struggle for power set in the rugged and mysterious hills of Appalachia.

In a desperate attempt to prove his innocence, a skilled police negotiator accused of corruption and murder takes hostages in a government office to gain the time he needs to find the truth.