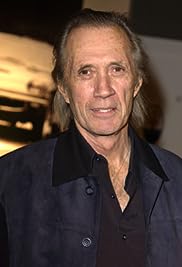 David Carradine was born in Hollywood, California, the eldest son of legendary character actor John Carradine, and his wife, Ardanelle Abigail (McCool). He was a member of an acting family that included brothers Keith Carradine and Robert Carradine as well as his daughters Calista Carradine and Kansas Carradine, and nieces Ever Carradine and Martha Plimpton.He was born in Hollywood and educated at San Francisco State College, where he studied music theory and composition. It was while writing music for the Drama Department's annual revues that he discovered his own passion for the stage, joining a Shakespearean repertory company and learning his craft on his feet. After a two-year stint in the army, he found work in New York as a commercial artist and later found fame on Broadway in "The Deputy" and "The Royal Hunt of the Sun" opposite Christopher Plummer. With that experience he returned to Hollywood, landing the lead in the short-lived TV series Shane (1966) before being tapped to star opposite Barbara Hershey in Martin Scorsese's first Hollywood film, Die Faust der Rebellen (1972). The iconic Kung Fu (1972) followed, catapulting Carradine to super-stardom for the next three years, until he left the series to pursue his film career.That career included more than 100 feature films, a couple of dozen television movies, a whole range of theater on and off Broadway and another hit series, Kung Fu - Im Zeichen des Drachen (1992).Carradine received the Best Actor Award from the National Board of Film Review as well as a Golden Globe nomination for his portrayal of Woody Guthrie in Hal Ashby's Dieses Land ist mein Land (1976), and he won critical acclaim for his work as Cole Younger in Long Riders (1980). "Kung Fu" also received seven Emmy nominations in its first season, including one for Carradine as Best Actor. In addition, he won the People's Prize at the Cannes Film Festival's "Director's Fortnight" for his work on Americana (1981), and a second Golden Globe nomination for his supporting role in Fackeln im Sturm (1985). Among his other notable film credits were U-Boot in Not (1978), Hexenkessel (1973), Ein Vogel auf dem Drahtseil (1990), Der Tod kennt keine Wiederkehr (1973), Das Schlangenei (1977) and Das Geheimnis des blinden Meisters (1978). He returned to the screen in what could be his greatest performance, playing the title role in Quentin Tarantino's Kill Bill: Vol. 1 (2003) and Kill Bill: Vol. 2 (2004), for which he received his fourth Golden Globe nomination. He also continued his devotion to music, and recorded some 60 tracks in various musical genres and sang in several movies. He made his home in Los Angeles with his fifth wife Annie, her four children and their two dogs.Found dead in Bangkok, Thailand, on June 3, 2009, aged 72. - IMDb Mini Biography By: frankfob2@yahoo.com (qv's & corrections by A. Nonymous)

Amazon Video has the most number of David Carradine’s flixes, followed by Tubi TV compared to other streaming platforms. See the full graph below.

On average the IMDB score of the movies that David Carradine has worked on is 5.5.

"Wild West Tech" was a documentary series for the History Channel that featured in depth interviews with historians and authors, as well as action packed recreations, to tell the story of ...

Two friends, one northern and one southern, struggle to maintain their friendship as events build towards the American Civil War.

The adventures of a Shaolin Monk as he wanders the American West armed only with his skill in Kung Fu.

The early life of Woody Guthrie as a vagabond folk singer.

A teen coming-of-age romantic dramedy about a media-obsessed geek and the most beautiful and twisted girl in school.

The origins, exploits and the ultimate fate of the Jesse James gang is told in a sympathetic portrayal of the bank robbers made up of brothers who begin their legendary bank raids because of revenge.