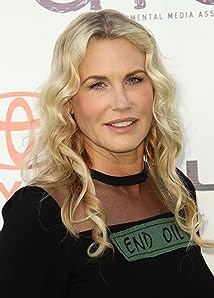 Daryl Christine Hannah was born and raised in Chicago, Illinois. She is the daughter of Susan Jeanne (Metzger), a schoolteacher and later a producer, and Donald Christian Hannah, who owned a tugboat/barge company. Her stepfather was music journalist/promoter Jerrold Wexler. Her siblings are Page Hannah, Don Hannah and Tanya Wexler. She has Scottish, Norwegian, Danish, Irish, English, and German ancestry.Daryl graduated from the University of Southern California School of Theatre. She practiced ballet with Maria Tallchief and studied drama at Chicago's Goodman Theatre. In her twenties, she played keyboard and sang backup for Jackson Browne. Hannah, a tall (5' 10") blond beauty, with haunting blue-green eyes, was a natural for show biz.She started with small roles, such as a student in The Fury (1978) and as Kim Basinger's kid sister in Hard Country (1981). Daryl's breakout role was as the acrobatic, beautiful replicant punk android Pris in Blade Runner (1982); Pris was the vixen who wanted to live beyond her allotted years and risked the wrath of the title character. Showing her versatility, from there she portrayed a mermaid, Madison, who falls in love with Tom Hanks's character in Ron Howard's zany comedy Splash (1984), and a Cro-Magnon in The Clan of the Cave Bear (1986). Hannah played Roxanne in the eponymous Steve Martins contemporary take on the Cyrano de Bergerac story, and co-starred as Elle Driver in Quintin Tarantino's box office hit Kill Bill: Vol. 2 (2004).Hannah has been a consistent, strong supporter of independent cinema, both acting in and producing many films, starring in such indie films as John Sayles's Casa de los babys (2003) as well as his political satire Silver City (2004). She worked on several films with the revered Robert Altman, including The Gingerbread Man (1998), as well as several films with the Polish Brothers including Northfork (2003) and Jackpot (2001). Daryl starred in the experimental improvised Michael Radford film Dancing at the Blue Iguana (2000) and made As a filmmaker, Hannah wrote, directed, and produced an award winning short film, entitled The Last Supper (1995). Hannah also directed, produced and shot the documentary Strip Notes (2002) which was inspired while researching her role for Dancing at the Blue Iguana (2000) that was shown on HBO and UK's Channel 4.Daryl is in the process of shooting a documentary on Human Trafficking and has traveled undercover to South East Asia to document this atrocity and has become and advocates raising awareness and ending slavery. She has made over 40 video blogs for various websites including her popular dhlovelife.com. She designed dhlovelife.com (online since 2005) her website dedicated to sharing solutions on how to live more harmoniously with the planet and all other living things. Daryl has been passionate, committed and effective advocate for a more ethical relationship with each other and all life on the Planet. She has produced, hosted and shot numerous environmental awareness/ health documentaries, TV appearances and is a frequent speaker on both the conservative and progressive news.Hannah has been a greening consultant for events such as the Virgin Music Festival, attended by over 150,000 people. Her many speaking engagements include keynote speeches at the UN Climate Change Summit, UN Global Business Conference on the environment, Natural and Organic Products Expo, LOHAS and numerous national and international universities, conferences and events. She has written articles on self sufficiency and sustainability for many magazines and has done a plethora of interviews on the topic in thousands of publications. The site features weekly five-minute inspirational video blogs which Daryl produces and films. There are daily news updates, alerts, community and access to goods and services. She is a member of the World Future Council, sits on the boards of the Sylvia Earle Alliance, Mission Blue, Eco America, Environmental Media Association (EMA), The Somaly Mam Foundation, and the Action Sports Environmental Coalition, She is the founder of the Sustainable Biodiesel Alliance (SBA). - IMDb Mini Biography By: Matt Dicker and kdhaisch@aol.com and CPG

Amazon Video has the most number of Daryl Hannah’s flixes, followed by Vudu compared to other streaming platforms. See the full graph below.

On average the IMDB score of the movies that Daryl Hannah has worked on is 5.9.

A film that captures the portraits and stories of extraordinary women around the world who are coming together to heal the injustices against the earth, weaves together poetry, music, art ...

Documentary
Eco-Terrorist: The Battle for Our Planet (2019)

Incinerators burning garbage in India. Hundreds of hydroelectric dams in Panama. Biogas extracted from palm oil in Honduras. Eucalyptus forests harvested for charcoal in Brazil. What do ...

A documentary about the present condition of many young adults in America. In a series of intensely honest interviews, the audience is forced to come face to face with some unfortunate truths about our kids.

From the ashes of the L.A. riots arose a lush, 14-acre community garden, the largest of its kind in the United States. Now bulldozers threaten its future.

The story of two North Carolina teens, Landon Carter and Jamie Sullivan, who are thrown together after Landon gets into trouble and is made to do community service.