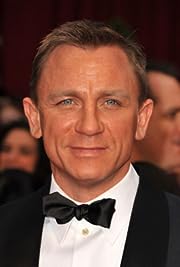 One of the British theatre's most famous faces, Daniel Craig, who waited tables as a struggling teenage actor with the National Youth Theatre, has gone on to star as James Bond in James Bond 007: Casino Royale (2006), James Bond 007 - Ein Quantum Trost (2008), James Bond 007: Skyfall (2012), James Bond 007: Spectre (2015), and James Bond 007: Keine Zeit zu sterben (2020).He was born Daniel Wroughton Craig on March 2, 1968, at 41 Liverpool Road, Chester, Cheshire, England. His father, Timothy John Wroughton Craig, was a merchant seaman turned steel erector, and then became landlord of the "Ring O'Bells" pub in Frodsham, Cheshire. His mother, Carol Olivia (Williams), was an art teacher. Craig is of English, as well as Welsh, Scottish, and Irish, ancestry. His parents split up in 1972, and young Daniel was raised with his older sister, Lea, in Liverpool, then in Hoylake, Wirral, in the home of his mother. His interest in acting was encouraged by visits to the Liverpool Everyman Theatre arranged by his mother. From the age of 6, Craig started acting in school plays, making his debut in the Frodsham Primary School production of "Oliver!", and his mother was the driving force behind his artistic aspirations. The first Bond movie he ever saw at the cinema was Roger Moore's James Bond 007 - Leben und sterben lassen (1973); young Daniel Craig saw it with his father, so it took a special place in his heart. He was also a good athlete and was a rugby player at Hoylake Rugby Club.At age 14, Craig played roles in "Oliver", "Romeo and Juliet" and "Cinderella" at Hilbre High School in West Kirby, Wirral. He left Hilbre High School at age 16 to audition at the National Youth Theatre's (NYT) troupe on their tour in Manchester in 1984. He was accepted and moved down to London. There, his mother and father watched his stage debut as Agamemnon in Shakespeare's "Troilus and Cressida". As a struggling actor with the NYT, he was toiling in restaurant kitchens and as a waiter. Craig performed with NYT on tours to Valencia, Spain, and to Moscow, Russia, under the leadership of director Edward Wilson. He failed at repeated auditions at the Guildhall, but eventually his persistence paid off, and in 1988, he entered the Guildhall School of Music and Drama at the Barbican. There, he studied alongside Ewan McGregor and Alistair McGowan, then later Damian Lewis and Joseph Fiennes, among others. He graduated in 1991, after a three-year course under the tutelage of Colin McCormack, the actor from the Royal Shakespeare Company. From 1992-1994, he was married to Scottish actress Fiona Loudon, their daughter, named Ella Craig (born 1992).Craig made his film debut in Im Glanz der Sonne (1992). His film career continued on television, notably the BBC2 serial Our Friends in the North (1996). He shot to international fame after playing supporting roles in Lara Croft: Tomb Raider (2001) and Road to Perdition (2002). He was nominated for his performances in the leading role in Layer Cake (2004), and received other awards and nominations. Craig was named as the sixth actor to portray James Bond, in October 2005, weeks after he finished his work in München (2005), where he co-starred with Eric Bana under the directorship of Steven Spielberg. Craig's reserved demeanor and his avoidance of the showbiz-party-red-carpet milieu makes him a cool 007. He is the first blond actor to play Bond, and also the first to be born after the start of the film series, and also the first to be born after the death of author Ian Fleming in 1964. Four of the past Bond actors: Sean Connery, Roger Moore, Timothy Dalton and Pierce Brosnan have indicated that Craig is a good choice as Bond. - IMDb Mini Biography By: Steve Shelokhonov

Amazon Video has the most number of Daniel Craig’s flixes, followed by Google Play Movies compared to other streaming platforms. See the full graph below.

On average the IMDB score of the movies that Daniel Craig has worked on is 6.8.

Drama,History
Our Friends in the North (1996)

A nine part series depicting the varying fortunes of four friends, Nicky, Geordie, Mary, and Tosker, from the optimistic times of 1964 to the uncertainties of 1995. Taking nine pivotal ...

After earning 00 status and a licence to kill, Secret Agent James Bond sets out on his first mission as 007. Bond must defeat a private banker funding terrorists in a high-stakes game of poker at Casino Royale, Montenegro.

A detective investigates the death of a patriarch of an eccentric, combative family.

Focuses on the cyclical journey taken by all living creatures, from birth to having youngsters of their own.

James Bond's loyalty to M is tested when her past comes back to haunt her. When MI6 comes under attack, 007 must track down and destroy the threat, no matter how personal the cost.

Crime,Drama,Mystery
The Girl with the Dragon Tattoo (2011)

Journalist Mikael Blomkvist is aided in his search for a woman who has been missing for forty years by Lisbeth Salander, a young computer hacker.

Comedy,Drama,Romance
The Fortunes and Misfortunes of Moll Flanders (1996)

Story of a woman who merely wished to be a loving wife, but always had to live the life of crime.

Based on the true story of the Black September aftermath, about the five men chosen to eliminate the ones responsible for that fateful day.