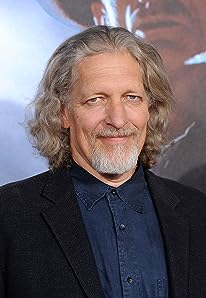 A tall, wavy-haired US actor with a deep, resonant voice, Clancy Brown has proved himself a versatile performer with first-class contributions to theater, feature films, television series and even animation.Clarence J. Brown III was born in 1959 in Urbana, Ohio, to Joyce Helen (Eldridge), a concert pianist, conductor, and composer, and Republican congressman Clarence J. "Bud" Brown, Jr., who helped manage the Brown Publishing Company, the family-owned newspaper started by Clancy's grandfather, Congressman Clarence J. Brown. Clancy spent much of his youth in close proximity to Washington, D.C. He plied his dramatic talents in the Chicago theater scene before moving onto feature film with a sinister debut performance bullying Sean Penn inside a youth reformatory in Bad Boys (1983). He portrayed Viktor the Monster in the unusual spin on the classic Frankenstein story in The Bride (1985), before scoring one of his best roles to date as the evil Kurgan hunting fellow immortals Christopher Lambert and Sean Connery across four centuries of time in Highlander (1986).Brown played a corrupt American soldier in the Walter Hill-directed hyper-violent action film Extreme Prejudice (1987), another deranged killer in Shoot to Kill (1988) and a brutal prison guard, who eventually somewhat "befriends" wrongfully convicted banker Tim Robbins, in the moving The Shawshank Redemption (1994). His superb vocal talents were in demand, and he contributed voices to animated series, including Mortal Kombat: Defenders of the Realm (1995), Street Sharks (1994), Gargoyles (1994) and Superman: The Animated Series (1996). Brown then landed two more plum roles, one as a "tough-as-nails" drill sergeant in the science fiction thriller Starship Troopers (1997), and the other alongside Robin Williams in the Disney comedy Flubber (1997).The video gaming industry took notice of Clancy's vocal abilities, too, and he has contributed voices to several top selling video games, including Crash Bandicoot: The Wrath of Cortex (2001), Lands of Lore III (1999), Star Wars: Bounty Hunter (2002) and Crash Nitro Kart (2003). His voice is also the character of cranky crustacean Mr. Eugene H. Krabs in the highly successful SpongeBob SquarePants (1999) animated series and films, and he contributed voices to The Batman (2004), Jackie Chan Adventures (2000) and Justice League (2001) animated series. A popular and friendly personality, Clancy Brown continues to remain busy both through his vocal and acting talents in Hollywood. - IMDb Mini Biography By: firehouse44@hotmail.com

Amazon Video has the most number of Clancy Brown’s flixes, followed by Vudu compared to other streaming platforms. See the full graph below.

On average the IMDB score of the movies that Clancy Brown has worked on is 6.6.

A continuation of the Justice League animated series finds the original members of the team joined in their battle against crime and evil by dozens of other heroes from the DC comics universe.

During the Great Depression, an Oklahoma farm boy and a charismatic minister learn that they are key players in a proxy war being fought between Heaven and Hell.

Two teenage slackers find a mecha from the future that had been lying in a New Jersey junkyard for nearly 60 years and make modifications much to the dismay of the robot's attractive creator.

The misadventures of a talking sea sponge who works at a fast food restaurant, attends a boating school, and lives in an underwater pineapple.

The last son of the planet Krypton protects his adoptive home of Earth as the greatest of the superheroes.

Documentary,Sci-Fi
In Search of Tomorrow (2022)

A nostalgic journey through '80s Sc-Fi films, exploring their impact and relevance today, told by the artists who made them and by those who were inspired to turn their visions into reality.

Set between Walt Disney Animation Studios' "Tangled" and its short film "Tangled Ever After," this animated adventure/comedy series unfolds as Rapunzel acquaints herself with her parents, her kingdom and the people of Corona.

A young woman, traumatized by a tragic event in her past, seeks out vengeance against those who cross her path.