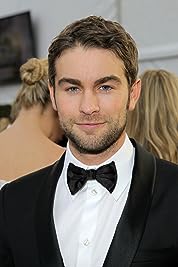 Christopher Chace Crawford was born in Lubbock, Texas, the son of Dana (Plott), a teacher, and Chris Wayne Crawford, a dermatologist. He grew up in Plano, Texas, and has a younger sister, Candice Crawford Romo, who studied broadcast journalism and won the Miss Missouri USA title in 2008. Chace played football and golf in high school, and is a talented artist. He graduated from Trinity Christian Academy in 2003. Although he worked as a model in Dallas, he never pursued acting. He moved to Malibu, California, to attend Pepperdine University after high school where he was a member of the Sigma Nu fraternity. He struggled to identify a career path, vacillating between advertising, business and communications majors. Midway through his second year, his mother encouraged him to pursue acting. He credits her for initiating this move. She stated that "it was a practical move," based on a career aptitude test he had taken in high school, which revealed he was best suited for a career in the performing arts. He was signed by the first talent agent that interviewed him and then committed full-time to acting studies.In 2006, Chace appeared in Lifetime's television movie Rendez-moi mon fils! (2006), where he plays the son of Gabrielle Anwar's character. That same year, he starred alongside Steven Strait, Taylor Kitsch, Sebastian Stan and Toby Hemingway in the horror/thriller movie, Le pacte du sang (2006). The year 2007 was a big break for Chace. He became one of the leads in CW's drama, Gossip Girl (2007). Among his cast members on the show are Penn Badgley, Leighton Meester & Ed Westwick. In the year 2008, Chace was seen in the movie Loaded (2008), opposite Jesse Metcalfe. He also got involved in the independent movie, The Haunting of Molly Hartley (2008) with Haley Bennett. His other guest appearance includes a stint on the Les Griffin (1999) episode Les Griffin: The Former Life of Brian (2008). Other than being involved in more acting projects, the year 2008 proved to be an even better year for Chace as he won the Choice TV Breakout Star Male at the Teen Choice Award. - IMDb Mini Biography By: Anonymous

Amazon Video has the most number of Chace Crawford’s flixes, followed by Vudu compared to other streaming platforms. See the full graph below.

On average the IMDB score of the movies that Chace Crawford has worked on is 6.3.

A group of vigilantes set out to take down corrupt superheroes who abuse their superpowers.

Privileged teens living on the Upper East Side of New York can hide no secret from the ruthless blogger who is always watching.

A young married couple of newcomers looks to cash in on the modern-day oil boom in North Dakota and becomes involved with sly local oil baron, Hap Briggs, and his troubled family.

When twelve ragtag teammates set out to play what should be a meaningless summer intramural baseball game, it ends up becoming the most important game of their lives.

Mountain Men is a comedy/drama that follows two estranged brothers, Toph and Cooper, as they journey to a remote family cabin in the mountains to evict a squatter. Buried resentment and ...

A young drug dealer watches as his high-rolling life is dismantled in the wake of his cousin's murder, which sees his best friend arrested for the crime.

A patriarch of a wealthy and powerful family suddenly passes away, leaving his daughter with a shocking secret inheritance that threatens to unravel and destroy the family.

A woman discovers the son she thought had drowned is alive and well, living with the man who kidnapped him.