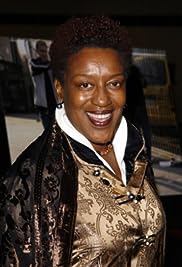 The CCH stands for Carol Christine Hilaria, her birth name. Most of her characters are enriched with positive attributes -- strength, confidence, integrity, strong-mindedness -- and it is a testament to the abilities of this four-time Emmy nominated actress that she continues on such a high plane in a five-decade career.Born on Christmas Day 1952 in Guyana, she was raised on a sugar cane plantation. Her parents, Betsy Enid Arnella (James) and Ronald Urlington Pounder, moved the family to the States while she was still a young girl, but she and her sister were subsequently sent to a convent boarding school in Britain where they were introduced to art and the classics. Following high school graduation, she arrived in New York and studied at Ithaca College, where her acting talents were strongly tapped into. Regional and classical repertory theater followed, earning roles in such productions as "The Mighty Gents" (1979) with Morgan Freeman at the New York Shakespeare Festival and "Open Admissions" (1984), her Broadway debut. Other stage work includes "Coriolanus," "Antony and Cleopatra," "The Frog," "The Lodger" and "Mumbo Jumbo."After bit/featured roles in Que le spectacle commence (1979), I'm Dancing as Fast as I Can (1982) and L'honneur des Prizzi (1985), CCH earned cult status in the art-house film Bagdad Café (1987) (aka "Bagdad Café" in the US) as the offbeat owner of a roadside café. She continued to impress with support roles in Bons baisers d'Hollywood (1990), The Importance of Being Earnest (1992), an all-black version: as Miss Prism), Benny & Joon (1993), RoboCop 3 (1993), Sliver (1993), Le cavalier du diable (1995),Volte/face (1997), Un coeur dans les étoiles (1999), The Devil in Miss Jones 6 (1999), Baby of the Family (2002), Rain (2008), Esther (2009), Avatar (2009) (as the voice of Mo'at, and its sequels), My Girlfriend's Back (2010). Home Again (2012) (as a Jamaican) and The Mortal Instruments: la cité des ténèbres (2013).Pounder's prominence came, however, with television. Often cast as succinct, professional types (doctors, policewoman, judges) or characters with a variety of accents, she is known for her understated intensity and earned an Emmy nomination for her stint on the hospital drama Urgences (1994). She has also performed in a number of highly acclaimed topical mini-movie dramas, including American Playhouse: Go Tell It on the Mountain (1985), Common Ground (1990), Murder in Mississippi (1990), Little Girl Fly Away (1998), Un don surnaturel (1999), Boycott (2001), Rédemption - Itinéraire d'un chef de gang (2004) (as Winnie Mandela) for which a number of kudos have come her way.Millennium TV output includes regular/recurring roles on the series The Shield (2002) in which she earned an NAACP Award and Emmy nomination as Detective Claudette Wym; the social drama Ciencias del espacio (2008) as matriarch Mrs. Trainor, and NCIS: Nouvelle-Orléans (2014) as medical examiner Loretta Wade. She later found voice work in animated projects and video games. - IMDb Mini Biography By: Gary Brumburgh / gr-home@pacbell.net

Amazon Video has the most number of CCH Pounder’s flixes, followed by Google Play Movies compared to other streaming platforms. See the full graph below.

On average the IMDB score of the movies that CCH Pounder has worked on is 6.5.

Follows the lives and cases of a dirty Los Angeles Police Department cop and the unit under his command.

Pete and Myka, U.S Secret Service agents, are deployed in South Dakota's Warehouse 13 with a new assignment from an authority above and outside the government.

A lonely German woman ends up in the most desolate motel on Earth and decides to make it brighter.

Captain Call has just buried Gus at Lonesome Dove and plans to head back to his ranch in Montana. Looking at a herd of wild Mustangs, he decides to drive them north with the help of Isom ...

A husband and wife who recently lost their baby adopt a 9 year-old girl who is not nearly as innocent as she claims to be.

A spin-off of NCIS: Naval Criminal Investigative Service (2003) about the local field office of NCIS that investigates criminal cases involving military personnel in The Big Easy, a city known for its music, entertainment and decadence. This colorful city that harbors a dark side is a magnet for service personnel on leave, and when overindulgence is followed by trouble, Special Agent Dwayne ...

A Pittsburgh apartment superintendent loses his job and home when the apartment building where he lives and works at is suddenly destroyed by fire. Daniel and his family moves in with his ...