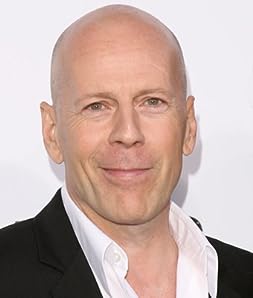 Actor and musician Bruce Willis is well known for playing wisecracking or hard-edged characters, often in spectacular action films. Collectively, he has appeared in films that have grossed in excess of $2.5 billion USD, placing him in the top ten stars in terms of box office receipts.Walter Bruce Willis was born on March 19, 1955, in Idar-Oberstein, West Germany, to a German mother, Marlene Kassel, and an American father, David Andrew Willis (from Carneys Point, New Jersey), who were then living on a United States military base. His family moved to the U.S. shortly after he was born, and he was raised in Penns Grove, New Jersey, where his mother worked at a bank and his father was a welder and factory worker. Willis picked up an interest for the dramatic arts in high school, and was allegedly "discovered" whilst working in a café in New York City and then appeared in a couple of off-Broadway productions. While bartending one night, he was seen by a casting director who liked his personality and needed a bartender for a small movie role.After countless auditions, Willis contributed minor film appearances, usually uncredited, before landing the role of private eye "David Addison" alongside sultry Cybill Shepherd in the hit romantic comedy television series A simlis és a szende (1985). His sarcastic and wisecracking P.I. is seen by some as a dry run for the role of hard-boiled NYC detective "John McClane" in the monster hit Drágán add az életed! (1988), in which Willis' character single-handedly battled a gang of ruthless international thieves in a Los Angeles skyscraper. He reprised the role of McClane in the sequel, Még drágább az életed (1990), set at a snowbound Washington's Dulles International Airport as a group of renegade Special Forces soldiers seek to repatriate a corrupt South American general. Excellent box office returns demanded a further sequel Die Hard - Az élet mindig drága (1995), this time co-starring Samuel L. Jackson as a cynical Harlem shop owner unwittingly thrust into assisting McClane during a terrorist bombing campaign on a sweltering day in New York.Willis found time out from all the action mayhem to provide the voice of "Mikey" the baby in the very popular family comedies Nicsak, ki beszél (1989), and its sequel Nicsak, ki beszél még! (1990) also starring John Travolta and Kirstie Alley. Over the next decade, Willis starred in some very successful films, some very offbeat films and some unfortunate box office flops. Hiúságok máglyája (1990) and Hudson Hawk - Egy mestertolvaj aranyat ér (1991) were both large scale financial disasters that were savaged by the critics, and both are arguably best left off the CVs of all the actors involved, however Willis was still popular with movie audiences and selling plenty of theatre tickets with the hyper-violent Az utolsó cserkész (1991), the darkly humored Jól áll neki a halál (1992) and the mediocre police thriller Árral szemben (1993).During the 1990s, Willis also appeared in several independent and low budget productions that won him new fans and praise from the critics for his intriguing performances working with some very diverse film directors. He appeared in the oddly appealing Világgá mentem (1994), as a cagey prizefighter in the Quentin Tarantino directed mega-hit Ponyvaregény (1994), the Terry Gilliam directed apocalyptic thriller 12 majom (1995), the Luc Besson directed sci-fi opus Az ötödik elem (1997) and the M. Night Shyamalan directed spine-tingling epic Hatodik érzék (1999).Willis next starred in the gangster comedy Bérgyilkos a szomszédom (2000), worked again with "hot" director M. Night Shyamalan in the less than gripping A sebezhetetlen (2000), and in two military dramas, Hart háborúja (2002) and A Nap könnyei (2003) that both failed to really fire with movie audiences or critics alike. However, Willis bounced back into the spotlight in the critically applauded Frank Miller graphic novel turned movie Sin City - A bűn városa (2005), the voice of "RJ" the scheming raccoon in the animated hit Túl a sövényen (2006) and "Die Hard" fans rejoiced to see "John McClane" return to the big screen in the high tech Die Hard 4.0 - Legdrágább az életed (2007) aka "Die Hard 4.0".Willis was married to actress Demi Moore for approximately thirteen years and they share custody to their three daughters. - IMDb Mini Biography By: firehouse44@hotmail.com

Amazon Video has the most number of Bruce Willis’s flixes, followed by Google Play Movies compared to other streaming platforms. See the full graph below.

On average the IMDB score of the movies that Bruce Willis has worked on is 6.0.

An NYPD officer tries to save his wife and several others taken hostage by German terrorists during a Christmas party at the Nakatomi Plaza in Los Angeles.

A movie that explores the dark and miserable town, Basin City, and tells the story of three different people, all caught up in violent corruption.

In a future world devastated by disease, a convict is sent back in time to gather information about the man-made virus that wiped out most of the human population on the planet.

A pair of young lovers flee their New England town, which causes a local search party to fan out to find them.

In the colorful future, a cab driver unwittingly becomes the central figure in the search for a legendary cosmic weapon to keep Evil and Mr. Zorg at bay.