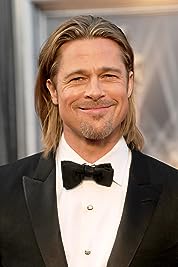 An actor and producer known as much for his versatility as he is for his handsome face, Golden Globe-winner Brad Pitt's most widely recognized role may be Tyler Durden in Harcosok klubja (1999). However, his portrayals of Billy Beane in Pénzcsináló (2011), and Rusty Ryan in the remake of Ocean's Eleven - Tripla vagy semmi (2001) and its sequels, also loom large in his filmography.Pitt was born William Bradley Pitt on December 18th, 1963, in Shawnee, Oklahoma, and was raised in Springfield, Missouri. He is the son of Jane Etta (Hillhouse), a school counselor, and William Alvin Pitt, a truck company manager. He has a younger brother, Douglas (Doug) Pitt, and a younger sister, Julie Neal Pitt. At Kickapoo High School, Pitt was involved in sports, debating, student government and school musicals. Pitt attended the University of Missouri, where he majored in journalism with a focus on advertising. He occasionally acted in fraternity shows. He left college two credits short of graduating to move to California. Before he became successful at acting, Pitt supported himself by driving strippers in limos, moving refrigerators and dressing as a giant chicken while working for "el Pollo Loco".Pitt's earliest credited roles were in television, starting on the daytime soap opera Another World (1964) before appearing in the recurring role of Randy on the legendary prime time soap opera Dallas (1978). Following a string of guest appearances on various television series through the 1980s, Pitt gained widespread attention with a small part in Thelma és Louise (1991), in which he played a sexy criminal who romanced and conned Geena Davis. This led to starring roles in badly received films such as Johnny Suede (1991) and Huncut világ (1992).But Pitt's career hit an upswing with his casting in Folyó szeli ketté (1992), which cemented his status as an multi-layered actor as opposed to just a pretty face. Pitt's subsequent projects were as quirky and varied in tone as his performances, ranging from his unforgettably comic cameo as stoner roommate Floyd in Tiszta románc (1993) to romantic roles in such visually lavish films as Interjú a vámpírral (1994) and Szenvedélyek viharában (1994), to an emotionally tortured detective in the horror-thriller Hetedik (1995). His portrayal of frenetic oddball Jeffrey Goines in 12 majom (1995) won him a Globe for Best Performance by an Actor in a Supporting Role.Pitt's portrayal of Achilles in the big-budget period drama Trója (2004) helped establish his appeal as action star and was closely followed by a co-starring role in the stylish spy-versus-spy flick Mr. és Mrs. Smith (2005). It was on the set of Mr. & Mrs. Smith that Pitt, who married Jennifer Aniston in a highly publicized ceremony in 2000, met his current partner Angelina Jolie. Pitt left Aniston for Jolie in 2005, a break-up that continues to fuel tabloid stories years after its occurrence.He continues to wildly vary his film choices, appearing in everything from high-concept popcorn flicks such as Megaagy (2010) to adventurous critic-bait like Becstelen brigantyk (2009) and Az élet fája (2011). He has received two Best Actor Oscar nominations, for Benjamin Button különös élete (2008) and Pénzcsináló (2011). In 2014, he starred in the war film Harag (2014), opposite Shia LaBeouf, Logan Lerman, Jon Bernthal, and Michael Peña.Pitt and Jolie have six children, including two sons and a daughter who were adopted. - IMDb Mini Biography By: Anonymous and JJH

Amazon Video has the most number of Brad Pitt’s flixes, followed by Google Play Movies compared to other streaming platforms. See the full graph below.

On average the IMDB score of the movies that Brad Pitt has worked on is 6.9.

An insomniac office worker and a devil-may-care soapmaker form an underground fight club that evolves into something much, much more.

Documentary
e2: The Economies of Being Environmentally Conscious (2006)

A six-part series about international efforts to design and build eco-friendly structures through sustainable architecture.

In Nazi-occupied France during World War II, a plan to assassinate Nazi leaders by a group of Jewish U.S. soldiers coincides with a theatre owner's vengeful plans for the same.

'Hitting the Apex' is the story of six fighters - six of the fastest motorcycle racers the world has ever seen - and of the fates that awaited them at the peak of the sport.

In the antebellum United States, Solomon Northup, a free black man from upstate New York, is abducted and sold into slavery.

In a future world devastated by disease, a convict is sent back in time to gather information about the man-made virus that wiped out most of the human population on the planet.