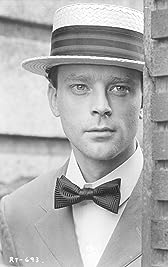 Gaunt character actor Brad Dourif was born Bradford Claude Dourif on March 18, 1950 in Huntington, West Virginia. He is the son of Joan Mavis Felton (Bradford) and Jean Henri Dourif, a French-born art collector who owned and operated a dye factory. His father died when Dourif was three years old, after which his mother married Bill Campbell, a champion golfer, who helped raise Brad, his brother, and his four sisters. From 1963 to 1965, Dourif attended Aiken Preparatory School in Aiken, South Carolina, where he pursued his interests in art and acting. Although he briefly considered becoming a professional artist, he finally settled on acting as a profession, inspired by his mother's participation as an actress in community theater.Beginning in school productions, he progressed to community theater, joining up with the Huntington Community Players, while attending Marshall University of Huntington. At age 19, he quit his hometown college and headed to New York City, where he worked with the Circle Repertory Company. During the early 1970s, Dourif appeared in a number of plays, off-Broadway and at Woodstock, New York, including Milos Forman who cast him in One Flew Over the Cuckoo's Nest (1975). Although this film is frequently cited as his film debut, in fact, Dourif made his first big-screen appearance with a bit part in W.W. and the Dixie Dancekings (1975). Nevertheless, his portrayal of the vulnerable Billy Bibbit in Forman's film was undoubtedly his big break, earning him a Golden Globe Award for Best Acting Debut, a British Academy Film Award for Best Supporting Actor, and an Oscar nomination for Best Supporting Actor.Skeptical of his instant stardom, Dourif returned to New York, where he continued in theater and taught acting and directing classes at Columbia University until 1988 when he moved to Hollywood. Despite his attempts to avoid typecasting, his intensity destined him to play eccentric or deranged characters, starting in Eyes of Laura Mars (1978), John Huston's Wise Blood (1979) (arguably his best performance to date), and Milos Forman's Ragtime (1981). Dourif then teamed up with director David Lynch for Dune (1984) and Blue Velvet (1986). His high-strung style also served him well in a number of horror films, notably as the voice of the evil doll Chucky in Child's Play (1988) and its sequels.Dourif broke from the horror genre with roles in Fatal Beauty (1987), Mississippi Burning (1988), Hidden Agenda (1990) and London Kills Me (1991). Recent film work includes the role of Grima Wormtongue in Peter Jackson's Lord of the Rings trilogy. Since his television debut in the PBS film The Mound Builders (1976), Dourif has made sporadic appearances on a number of television series, such as The X-Files (1993), Babylon 5 (1993), Star Trek: Voyager (1995), Millennium (1996) and Ponderosa (2001). He also appeared in the music video "Stranger in Town" (1984) by the rock band TOTO. - IMDb Mini Biography By: Lyn Hammond

Amazon Video has the most number of Brad Dourif’s flixes, followed by Vudu compared to other streaming platforms. See the full graph below.

On average the IMDB score of the movies that Brad Dourif has worked on is 5.6.

Two F.B.I. Agents with wildly different styles arrive in Mississippi to investigate the disappearance of some civil rights activists.

A young black pianist becomes embroiled in the lives of an upper-class white family set among the racial tensions, infidelity, violence, and other nostalgic events in early 1900s New York City.

When an American human rights lawyer is assassinated in Belfast, it remains for the man's girlfriend, as well as a tough, no nonsense, police detective to find the truth.

A Southerner--young, poor, ambitious but uneducated--determines to become something in the world. He decides that the best way to do that is to become a preacher and start up his own church.

In a raging blizzard five days before Christmas, two young people meet by chance: Lisa, 19, pregnant and scared, and Brad, a professional snowboarder. Both want to make it over the ...

A single mother gives her son a much sought-after doll for his birthday, only to discover that it is possessed by the soul of a serial killer.

A police Lieutenant uncovers more than he bargained for as his investigation of a series of murders, which have all the hallmarks of the deceased Gemini serial killer, leads him to question the patients of a psychiatric ward.