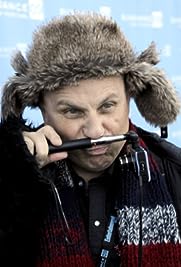 Robert Francis 'Bobcat' Goldthwait, born May 26, 1962, is an American comedian, and writer, producer, director, and star of films and television shows. He is most widely known for his at times screechy voice and scattergun delivery during his standup comedy performances and some film roles.He was born in Syracuse, New York in 1962. He decided on a career as a comedian at an early age and was performing professionally while still in high school at the age of 15. He and his classmate, Tom Kenny, performed in a comedy duo, billing themselves as "Bobcat and Tomcat". Goldthwait became recognized as a solo stand-up comedian and had three televised concert specials in the 1980s: Bob Goldthwait - Is He Like That All the Time?, An Evening with Bobcat Goldthwait: Share the Warmth (1987) and Meat Bob.Goldthwait's first major film role was in Police academy 2: au boulot! (1985). He reprised the role in the next two films in the series.During the fall of 1993, Goldthwait did stand-up material as an opening act for Nirvana on what would be their final North American tour.He has made several guest appearances on talk shows as well as comedy programs including The Ben Stiller Show (1992). On May 9, 1994, he made a controversial appearance on The Tonight Show with Jay Leno (1992), where, on impulse, he set a couch on fire. This incident was then the basis of the plot for his subsequent appearance on The Larry Sanders Show (1992).One of the most recognizable features of Goldthwait's performances is his voice. Goldthwait has voiced characters on the television series Des Souris à la Maison-Blanche (1992); The Moxy Show (1995); Unhappily Ever After (1995); Hercules (1998) and Buzz l'Éclair (2000). He has also appeared, as himself, hosting the comedy quiz show Bobcat's Big Ass Show (1998).Goldthwait has released two comedy albums: "Meat Bob" (1988) on Chrysalis Records and "I Don't Mean to Insult You, but You Look Like Bobcat Goldthwait" (23 September, 2003) on Comedy Central Records.He made his feature film directorial debut with Shakes the Clown (1991), which he wrote and starred in as well.His film, Windy City Heat (2003), won a Comedia Award for Best Comedy Film at Montreal's Just for Laughs Film Festival in 2004.He married Ann Luly in 1986 at the age of 24. The couple have two children (now grown), Tasha and Taylor, and divorced in May 1998. At one time, Goldthwait was engaged to his Unhappily Ever After (1995) co-star, Nikki Cox, but the couple has since split.Bobcat began directing ABC's Jimmy Kimmel Live! (2003) in the fall 2004 season. Since joining the show's crew, the ratings went up to 2 million viewers a night, with the numbers rising nearly 50% with the teenage demographic. In May of 2006, he left to pursue his film career as a filmmaker/director but has since returned to the show.Goldthwait's most recent feature, "Sleeping Dogs Lie" (formally Juste une fois! (2006)), starring Melinda Page Hamilton, was in the 2006 Sundance Film Festival and it was part of the "Independent Dramatic Features" competition. "Sleeping Dogs Lie" is about a youthful, impulsive sexual encounter which opens the door to a dark comedy about the complexities of honesty. It was also nominated for the Grand Jury Prize in the "Dramatic Features" category. "Sleeping Dogs Lie" was picked up in a mid-six figure deal for distribution in north America by Roadside Attractions & Samuel Goldwyn Films at the 2006 Sundance Film Festival. A French film company called "Gaumont" bought it for the international rights to the film in France. "Tartan Films", a UK-based production company, also bought it for international rights in the United Kingdom. The film was released in the US on October 20, 2006. - IMDb Mini Biography By: EXXON-2 and bumpy-3

Amazon Video has the most number of Bobcat Goldthwait’s flixes, followed by Vudu compared to other streaming platforms. See the full graph below.

On average the IMDB score of the movies that Bobcat Goldthwait has worked on is 6.4.

Comedy,Crime,Fantasy
Tales from the Crypt (1989)

Tales of horror based on the gruesome E.C. comic books of the 1950s presented by the legendary Crypt Keeper, a sinister ghoul obsessed with gallows humor and horrific puns.

Space Ghost, a superhero from a 1960s Hanna-Barbara cartoon, hosts his own talk show.

Barry Crimmins is pissed. His hellfire brand of comedy has rained verbal lightning bolts on American audiences and politicians for decades, yet you've probably never heard of him. But once ...

On a mission to rid society of its most repellent citizens, terminally ill Frank makes an unlikely accomplice in 16-year-old Roxy.

When his son's body is found in a humiliating accident, a lonely high school teacher inadvertently attracts an overwhelming amount of community and media attention after covering up the truth with a phony suicide note.