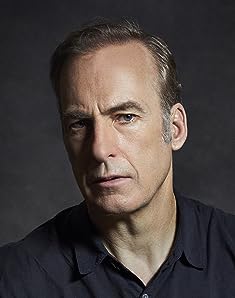 Robert John Odenkirk was born in Berwyn, Illinois, to Barbara (Baier) and Walter Odenkirk, who worked in printing. His ancestry includes German and Irish. He grew up in Naperville, IL, the second of seven children. He worked as a DJ for WIDB, his college radio station at Southern Illinois University Carbondale. Three credits shy of graduation, he moved to Chicago. He began work there in local improv workshops. He also did open-mic stand-up comedy for several years. In Chicago, he became friends with Robert Smigel, who would later help him become a writer for Saturday Night Live (1975).In 1987, Bob was hired as a writer for Saturday Night Live (1975) and in 1989 he went on to win an Emmy for his writing work. He worked on the show from season 13 to 20 (1987-1995). However, he had trouble getting his work on the air, so he began work as a writer for Get a Life (1990) starring Chris Elliott. The show was quickly canceled, but he was soon hired as writer for The Dennis Miller Show (1992). On that show he made his acting debut and was noticed by Ben Stiller, who later hired him as a writer and actor for The Ben Stiller Show (1992). The show only lasted for 13 episodes, but Bob won another Emmy for his writing.After The Ben Stiller Show (1992) was canceled, Bob made recurring appearances (1993-1998) on The Larry Sanders Show (1992) as Stevie Grant, Larry's hyperactive agent. He also wrote for Late Night with Conan O'Brien (1993) during 1993-94. During this time Bob hooked up with fellow The Ben Stiller Show (1992) writer David Cross, also a stand-up comedian. They started doing sketch-comedy shows together in Los Angeles. In 1995, they got their own show on HBO (Mr. Show with Bob and David (1995)). The show lasted for four seasons and 30 episodes.After Mr. Show with Bob and David (1995) ended, Bob wrote Run Ronnie Run (2002) and directed three feature films (Melvin Goes to Dinner (2003), Let's Go to Prison (2006) and The Brothers Solomon (2007)), and appeared in . After 1998, he also made many guest appearances on TV shows like Blush (1997), 3rd Rock from the Sun (1996), Ingen grunn til begeistring (2000), Ed (2000), Alle elsker Raymond (1996), Less Than Perfect (2002), Arrested Development (2003), How I Met Your Mother (2005) and Weeds (2005). From 2009 to 2013, he appeared on 43 episodes of Breaking Bad (2008) as Saul Goodman, a shyster lawyer, and, starting in 2015, he reprised that role as the main character in Better Call Saul (2015). - IMDb Mini Biography By: Mary Connelly<Flowerangel23@yahoo.com>, Tomi, and J. Perkins <imdb@jdperkins.net>

Amazon Video has the most number of Bob Odenkirk’s flixes, followed by Vudu compared to other streaming platforms. See the full graph below.

On average the IMDB score of the movies that Bob Odenkirk has worked on is 7.1.

A high school chemistry teacher diagnosed with inoperable lung cancer turns to manufacturing and selling methamphetamine in order to secure his family's future.

The trials and tribulations of criminal lawyer Jimmy McGill in the time before he established his strip-mall law office in Albuquerque, New Mexico.

This is a sketch-comedy show. The twist here is that all of the sketches (even the monologue) are connected in some strange way.

A woman discovers she has a new relationship with time after surviving a car accident that almost killed her.

Tenacious D is a two-piece musical act, and this HBO series documents their many struggles as friends, and as a band of two very absurd individuals.

An aging, booze-addled father makes the trip from Montana to Nebraska with his estranged son in order to claim a million-dollar Mega Sweepstakes Marketing prize.